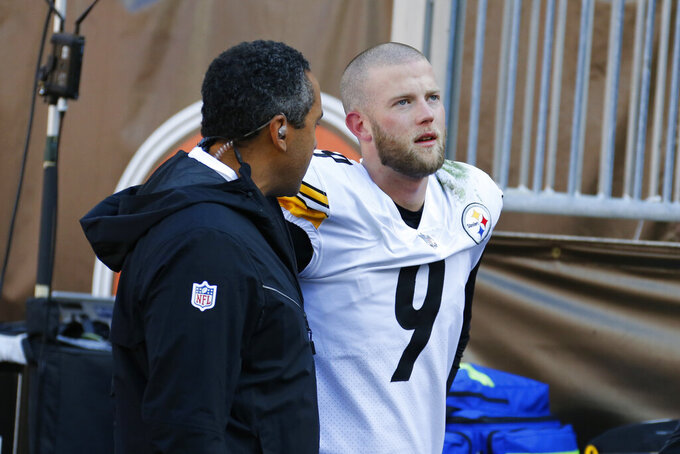 Pittsburgh Steelers kicker Chris Boswell (9) walks off the field after an injury during the first half of an NFL football game against the Cleveland Browns, Sunday, Oct. 31, 2021, in Cleveland. (AP Photo/Ron Schwane)

Roethlisberger handed the Browns yet another painful loss as the Pittsburgh Steelers overcame losing kicker Chris Boswell for the entire second half with a concussion in a 15-10 win on Sunday.

Garrett recently decorated the front yard of his house with markers of the QBs he had dropped during his career. He also came to Sunday's Halloween game in costume, dressed as the Grim Reaper intent on getting Roethlisberger again.

Roethlisberger threw a touchdown pass to rookie Pat Freiermuth and rookie Najee Harris had an 8-yard TD run after halftime for the Steelers (4-3), who were handicapped by Boswell getting hurt on a trick play that blew up.

“That fake field goal, man, was a bad call,” Steelers coach Mike Tomlin said. “I appreciate the guys backing my play and fighting for the entire 60 minutes and making it a side note.”

At halftime, Tomlin told his team Boswell was done for the day and the Steelers wouldn't be trying any more kicks, which explains why punter Pressley Harvin III didn't even bother practicing on the sideline.

“When we lost Boz, I started to ask, ‘Am I going to do some pooch punting? Or would I have to hold because I’m the backup holder?’" Roethlisberger said.

The Browns (4-4) had plenty of chances, but wide receiver Jarvis Landry had a costly fumble and then couldn't handle two passes from Baker Mayfield in the final 6:04.

“I really just go back to two or three plays where myself having an opportunity to make plays and just didn’t,” Landry said. “I owe it to my teammates.”

The 38-year-old Roethlisberger finished 22 of 34 for 266 yards — 193 in the second half when the Steelers had no margin for error.

With no Boswell, who got hurt when he was drilled by Browns tackle Jordan Elliott after throwing an incomplete pass, Tomlin’s play-calling was influenced throughout the second half.

Roethlisberger’s 2-yard TD pass — on fourth down — to Freiermuth put the Steelers up 15-10 with 11:04 left. Freiermuth initially bobbled the throw, but secured it and got both feet down in the back of the end zone.

Without his kicker, Tomlin was forced to go for 2 for a second time, but Roethlisberger’s pass was incomplete.

The Browns were in position to potentially take the lead, but the sure-handed Landry was stripped by former Cleveland linebacker Joe Schobert and T.J. Watt recovered the ball with 6:04 left.

“I've seen Joe make plays like that for years, especially when he was playing for Cleveland,” said Watt, who also had 1 1/2 sacks. “I just fell on the ball.”

Mayfield, who returned to the lineup this week after missing one game with a left shoulder injury, got the ball back with 4:22 to go. The Browns got to the Steelers 26, but Rashard Higgins was called a false start and Landry, who dropped a pass earlier in the drive, couldn't secure a high throw on fourth down with 1:53 left.

“It's on all of us,” Mayfield said. “Everybody is going to point fingers at a few plays, but the fact is we just did not get into a rhythm today. We stubbed our toe a few times — penalties and just did not make the plays we needed to to win.”

Pittsburgh then sealed it when receiver Dionte Johnson took a short slant 50 yards and Roethlisberger was able to run out the clock.

As he promised, Garrett came in costume, with his outfit accented by a scythe and the names of quarterbacks he had sacked written on his cape. He wore the cape to his postgame news conference.

Garrett got to Roethlisberger once, but he affected other throws, including a 2-point conversion attempt in the third quarter.

Pittsburgh ended a first half dominated by defense with a trick play that cost them points and Boswell.

After lining up for a 28-yard attempt, Boswell took a direct snap from center and rolled right. Unable to find an open receiver, he threw the ball deep into the end zone before taking a high, hard hit by Elliott near Pittsburgh’s sideline.

Elliott's shot appeared to be a helmet-to-helmet, which could have resulted in a roughing-the-passer penalty.

Referee Shawn Hochuli said the crew didn't see any "contact that rose to the level of a foul.”

Browns: RT Jack Conklin dislocated his left elbow in the second quarter. The team sent out a cart and an air cast was brought out before Conklin walked off, supporting his wrist. He had missed the previous two games with a knee injury. ... S John Johnson III didn't return after suffered a neck stinger in the first half.

Steelers: A Nov. 8 Monday night date against the Chicago Bears.

Browns: Stay inside the division with a visit to Cincinnati on Sunday.