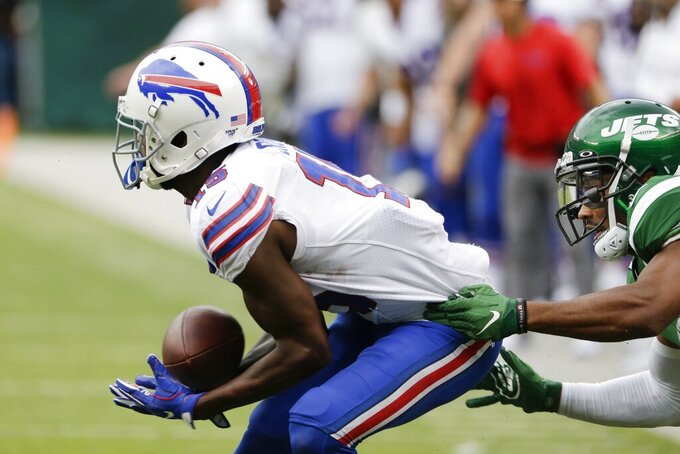 Buffalo Bills' John Brown (15) catches a pass in froint of New York Jets' Darryl Roberts during the second half of an NFL football game Sunday, Sept. 8, 2019, in East Rutherford, N.J. Brown would score a touchdown on the play as the Bills won 17-16. (AP Photo/Seth Wenig)

ORCHARD PARK, N.Y. (AP) — What impressed receiver John Brown upon signing with the Buffalo Bills in free agency is how the team wouldn't take no for answer.

Rejected by Brown in 2018 when he signed a one-year contract with Baltimore, the Bills came calling once again in March.

Chalk one up for persistence after the sixth-year player made a splash in his Bills debut Sunday.

Brown's 38-yard touchdown reception with three minutes left capped a rally in which Buffalo overcame a 16-0 deficit to beat the New York Jets 17-16. His 123 yards receiving were the most by a Bills player since Sammy Watkins had 154 yards on Dec. 24, 2016.

"I'm not too much worried about that," he said, referring to his production as Buffalo prepares to play in the same stadium at the New York Giants (0-1) this weekend. "That's just something that they brought me in to do."

The Bills began targeting the 5-foot-11 speedster in free agency in a bid to add a deep threat after Brown produced varying results during his first four seasons in Arizona. Brown instead chose Baltimore, preferring to play with a proven starter in Joe Flacco as opposed to the uncertainty Buffalo had at quarterback after Tyrod Taylor was traded to Cleveland and the Bills had yet to select Allen with the No. 7 pick in the draft.

The strong-armed Allen showed enough promise during his rookie season for Brown to sign a three-year contract with the Bills.

Brown's addition came as part of a flurry of signings, and included veteran slot receiver Cole Beasley. The Bills overhauled a patchwork offense, and are hopeful it will spur Allen's development entering his second season.

Brown and Allen hit it off almost instantly, as evidenced once training camp opened in July.

One day, Brown was bursting past defenders and making acrobatic catches deep downfield. The next day, he showed off his shiftiness, creating openings and making catches in tight spaces during red-zone periods.

On Sunday, facing third-and-4, Brown was lined up on the left and broke quickly off the line, before slowing down to gain separation from defender Darryl Roberts. Brown then sped up once again before curling back to catch a perfectly timed pass. Spinning upfield, the receiver nicknamed 'Smoke' easily shed Roberts, who had lost his balance, and scampered the final 14 yards into the end zone.

"I just laid it out there and he made the play," Allen said. "Typically, you play how you practice. And Smoke comes out and practices extremely hard."

The touchdown came on a play Brown and Allen have practiced on numerous occasions with cornerback Tre'Davious White in coverage.

"It happened the same way it happened in the game," Brown said.

"He can pretty much run any route in the route tree. He'll threaten you with a lot of speed, so you've got to stay honest," White said.

"You can't just stay over top because he can run short, intermediate routes, and go deep. He's like the total package," he added. "You never know what he's going to run because all his (breaks off the line of scrimmage) look the same."

Brown credits being mentored by Cardinals receiver Larry Fitzgerald and the late Darryl Drake, his position coach in Arizona. The trouble has been finding a place to make an impact.

Brown was mostly pigeonholed as a deep threat in Arizona, where his best season came in 2015, when he had 1,003 yards receiving and scored seven times. He was off to a productive start in Baltimore before Flacco was hurt and the Ravens shifted to a run-oriented attack under rookie quarterback Lamar Jackson.

So Brown had 37 catches for 518 yards and four touchdowns in nine games with Flacco, and only 10 catches for 128 yards in eight games — including one in the playoffs — with Jackson.

"It was kind of disappointing, but the mature person that I am, I sat back and realized that's what was winning us games at the time," Brown said. "When you get put in a situation like that in the middle of the season, I guess things happen to flow like that."

He prefers focusing on the start he's off to in Buffalo.

By W.g. Ramirez 54 minutes ago
By Brett Martel 2 hrs ago
By Dan Greenspan 2 hrs ago
3 hrs ago
By Tom Canavan 3 hrs ago