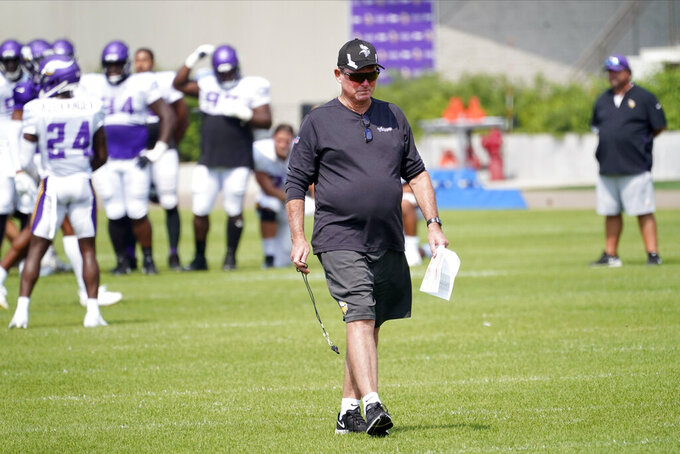 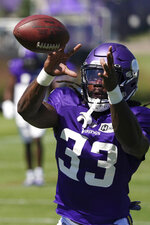 EAGAN, Minn. (AP) — With the five-year anniversary of the knee injury that nearly ended his career and clearly altered the trajectory of his original team approaching in a few weeks, Teddy Bridgewater has found himself thinking more than usual lately about that fateful moment.

Fittingly, he has returned this week to Minnesota, the very place those ligaments were torn. Bridgewater and the Denver Broncos dropped in for a visit, for two full days of joint practices with the Vikings in advance of their exhibition opener Saturday.

"I use it as motivation. Before, I used to brush it off, like, ‘Man, it happens. Keep going.’ Now it’s just like, ‘Man, here I am where I could have been counted out, and I almost had to have my leg amputated.' I wake up in the morning, and I’m blessed. I get an opportunity to put my feet on the ground and go out and play football,” Bridgewater said on Wednesday, after another session on the field of shared turns with Drew Lock as the first team quarterback.

Bridgewater, who was drafted by the Vikings in the first round in 2014, was poised for significant strides in his third season when he innocuously dropped back to pass in practice and collapsed to the ground when his left knee buckled in a freak, noncontact manner on Aug. 28, 2016.

Not only were multiple ligaments torn, but he had a dislocation of the joint that put him at risk for nerve damage. The recovery was so long that he didn't appear in a game for another 16 months, and when his rookie contract expired after 2017 the Vikings had little choice but to let him leave as a free agent without guarantee he'd be the same.

Now, four teams later and coming off his first full year as a starter since the injury, Bridgewater — he went 4-11 with Carolina in 2020 — has yet another opportunity with Denver.

“You can lay down and be eaten alive, or you can survive and keep hunting so that’s been my mindset,” Bridgewater said.

There were plenty of Vikings fans in attendance at TCO Performance Center — the sparkling, sprawling facility that had not yet been built when Bridgewater was with the team — wearing his purple No. 5 jersey.

“The people in Minnesota, they welcomed me and my family. They welcomed a boy who became a man, and they were so genuine here and I appreciate that to this day,” Bridgewater said.

The admiration has long been mutual, even with a decreased amount of players and coaches still with the Vikings from his stay from 2014-17. Bridgewater checked in with a text message to head coach Mike Zimmer earlier this summer, sharing the news of his son that was born in February.

“He’s always been a real steady kid who doesn’t get flustered,” Zimmer said. "He understands situational football really well. I think he does a really good job of getting the ball out when he needs to. When he sees the pressure, he’s got a quick release, and he’s probably moving in the pocket even better now, I think.”

Zimmer initiated the idea of practicing this month with the Broncos, a long-held NFL tradition during training camp that has only increased in popularity with the reduction in preseason games. Zimmer and the Vikings have a familiarity with Broncos head coach Vic Fangio, from his time as defensive coordinator in Chicago, but the connections between the two sides run deeper than that.

There's Bridgewater on the Denver roster, of course, but so is running back Mike Boone, defensive tackle Shamar Stephen and center Brett Jones. Offensive coordinator Pat Shurmur held that job for Zimmer in 2016-17, and new general manager George Paton was the deputy in Minnesota for 14 years. His special advisor, Kelly Kleine, was plucked from the Vikings scouting department.

On the flip side, four assistants on Minnesota's offensive staff — Klint Kubiak, Phil Rauscher, Brian Pariani and Rick Dennison — have roots in Denver. Their connection was Gary Kubiak, the longtime Broncos player and coach who retired after last season as offensive coordinator of the Vikings, ceding the responsibility to his son.