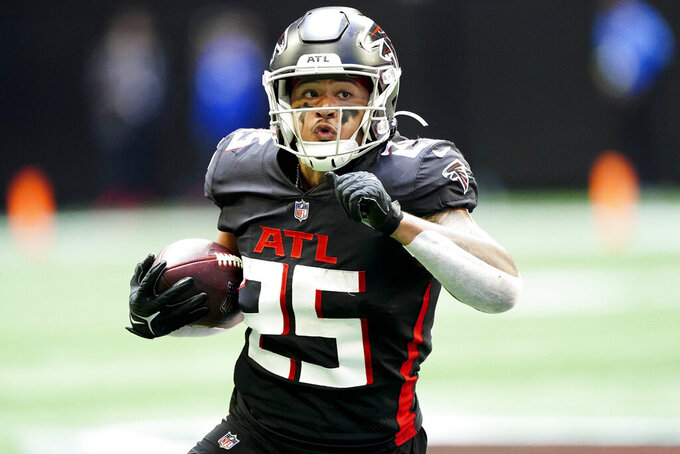 Atlanta Falcons running back Tyler Allgeier (25) runs against the Cleveland Browns during the second half of an NFL football game, Sunday, Oct. 2, 2022, in Atlanta. (AP Photo/John Bazemore)

TAMPA, Fla. (AP) — Chris Godwin looks at the Atlanta Falcons and doesn’t see the same NFC South rival the Tampa Bay Buccaneers have had their way with lately.

“I think one of the biggest things is that they’re playing with a lot of momentum right now. They won two straight and ... they’ve got a lot of talented young guys that are hungry,” Godwin said, looking ahead to Sunday’s matchup at Raymond James Stadium.

“It’ll be a challenge for us. Add on top of that, it’s a divisional opponent,” Godwin added. “I think everyone understands that we’re all fighting for first place in the division, and they’re going to come here and give us their best shot.”

The season is young, however Tampa Bay is riding a two-game losing streak — with both setbacks coming at home.

“Two-and-two is not where we want to be,” Bucs quarterback Tom Brady said. “We’ve got to do a lot of things a lot better.”

A Brady-led team has not lost three straight since 2002. He is 10-0 all-time against Atlanta, and the Bucs have scored at least 30 in beating up on the Falcons all four times they’ve faced them since the 45-year-old quarterback signed with Tampa Bay in 2020.

The seven-time Super Bowl champion is coming off throwing for a season-best 385 yards and three touchdowns without an interception in a 41-31 loss to Patrick Mahomes and the Kansas City Chiefs.

The offense sputtered the previous week in a 14-12 loss to Aaron Rodgers and the Green Bay Packers.

“We’re 0-2 at home. That sucks. That’s the reality,” Brady said. “There’s no excuses. We haven’t got the job done. It’s a production business.”

The Falcons have ridden one of the NFL’s most productive running attacks to a solid start.

Meanwhile, Tampa Bay’s usually reliable defense is looking to redeem despite themselves after yielding 189 yards on the ground against the Chiefs.

The Bucs allowed 27 points in their first three games combined and have been the league’s stingiest team against the run over the past three-plus seasons.

“I would have never guessed that we would have (given) up 41 points at any point of the year,” linebacker Shaquil Barrett said. “That hurts as a team that prides ourselves on good defense and wanting to be one of the best units in the league. Giving up 41 points diminishes that.”

The Falcons rushed for202 yards in a 23-20 victory over the Cleveland Browns last week. While it would be nice to duplicate that success, coach Arthur Smith isn’t counting on the Bucs allowing Atlanta to run wild.

“I guess another way to put it, you do look at it but understand that they are going to do something different to get it fixed,” Smith said.

“They had a completely different plan for Kansas City. ... They’ve got the best run defense these past couple of years,” Smith added. “So, they’ll have something different for us and how they play it.”

GOTTA STOP THEM, TOO

Brady threw for 644 yards, with nine TD passes vs. one interception, in two victories over Atlanta in 2021.

Godwin had 15 catches for 143 yards in the last meeting. The Bucs receiver has nine TD receptions, while averaging 104 yards per game, over his last seven against the Falcons.

The Falcons are fourth in the NFL in rushing offense at 168 rushing yards per game. Now they’ll have to show they can get the job done without leading rusher Cordarrelle Patterson, who was placed on injured reserve this week and will be sidelined a minimum of four games.

Allgeier led Atlanta with 84 yards on 10 carries in last week’s win over Cleveland. Huntley ran for 56 yards with a touchdown on 10 carries.

Right guard Chris Lindstrom earned the highest grade (91.3) of any interior offensive lineman in the league last week, according to Pro Football Focus. Lindstrom, a first-round pick from Boston College in 2019, continues to emerge as the top player on the line.

“I’m being objective, but Chris is playing really good football for us,” Smith said. “I’m not making light of those grades, whatever, you appreciate it because you want people to care about this game.”

Grady Jarrett’s 3 1/2 sacks lead the Falcons and are the most for an interior defensive lineman in the league.

He has had a sack in three of four games. Since sacks became an official statistic in 1982, the Falcons have had only three players record sacks in four of the first five games: John Abraham, 2008; Brady Smith, 2004; and Chuck Smith, 1997.