Breakdowns on special teams give Packers reason to worry 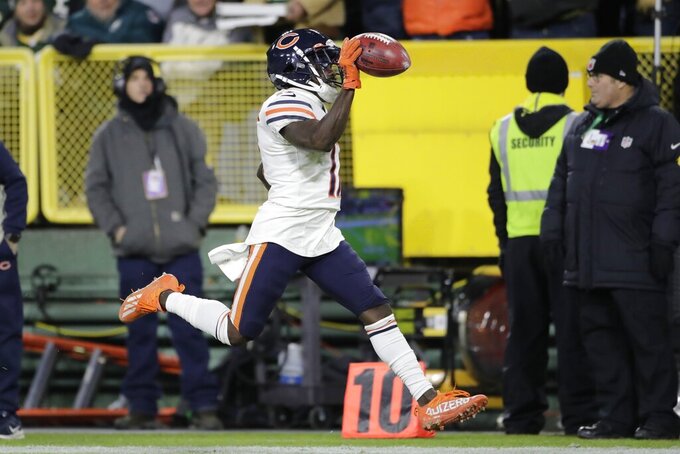 Chicago Bears' Jakeem Grant Sr. runs a punt back for a touchdown during the first half of an NFL football game against the Green Bay Packers Sunday, Dec. 12, 2021, in Green Bay, Wis. (AP Photo/Aaron Gash)

GREEN BAY, Wis. (AP) — As they close in on a third straight outright division title and chase the top seed in the NFC playoffs, the Green Bay Packers still have causes for concern.

There’s the depth of an offensive line that took one more hit as right tackle Billy Turner suffered a knee injury Sunday. There’s the health of quarterback Aaron Rodgers, who said his fractured pinky toe started feeling worse during a 45-30 victory over the Chicago Bears.

And then there’s the special teams, the Packers' glaring weakness.

The Packers (11-3) beat the Bears (4-9) despite allowing Jakeem Grant to score on a 97-yard punt return and deliver a 34-yard return that set up a field goal. That 97-yarder was the longest punt return by any Bears player since at least 1960.

“When you’re playing an explosive returner like that, you need everybody to be perfect,” Packers coach Matt LaFleur said Monday. “Unfortunately, we weren't perfect. We were far from perfect."

That also applied to other aspects of Green Bay's special teams,

A muffed punt return by Amari Rodgers would have given Chicago the ball at Green Bay’s 20-yard line if a Bears penalty hadn’t nullified the turnover. The Packers had to start a first-quarter possession at their 5-yard line when Malik Taylor mishandled a kickoff that appeared to be heading out of bounds. The Packers also allowed Chicago to recover an onside kick.

“Certainly, it’s not up to our standard,” LaFleur said after the game.

The situation has become dire enough that the first question LaFleur faced after a two-touchdown victory that gave the Packers a four-game lead in the NFC North was whether he planned to change special team coordinators again this week.

Then he went into more detail.

“We’ve got to continue to work, we’ve got to look at the tape, we’ve got to get things corrected,” LaFleur said. “I’ll be the first to tell you that, yeah, is there some things that we have to clean up as coaches? No doubt about it. But we’ve got to execute better as well.”

Special teams problems arguably made the difference in one of Green Bay’s three losses this season, a 13-7 defeat at Kansas City, although Aaron Rodgers was sidelined under COVID-19 protocols for that game. Mason Crosby missed a 40-yard field goal and had a 37-yarder blocked at Kansas City. The Chiefs got a field goal after recovering a fumble when a punt bounced off Taylor, who was a downfield blocker on the play. Amari Rodgers also muffed a punt in that game but made the recovery.

LaFleur said Monday the Packers may have to consider assigning more duties on specials teams to guys who already earn plenty of playing time on offense or defense. He noted how cornerback Rasul Douglas baited Chicago's Kindle Vildor into going out of bounds before heading back inbounds, resulting in a penalty that wiped out Amari Rodgers' muffed punt.

“I think we're getting to that point where it's all hands on deck,” LaFleur said. “We're going to have to ask guys to maybe do a little bit more. I think Rasul's such a great example."

The offense scored four touchdowns in a stretch of five series that began in the second quarter. … After gaining just 2.9 yards per carry in a victory over the Los Angeles Rams two weeks ago, the Packers had 5 yards per rush Sunday. … The Packers had three takeaways for a second straight game.

Amari Rodgers continued his struggles as a punt returner in his rookie season. He also hasn’t caught a pass since Oct. 28.

6 — The Packers have beaten the Bears six consecutive times. That’s their longest winning streak in this rivalry since taking seven straight from 2000-03. According to the Elias Sports Bureau, LaFleur and former Minnesota Vikings coach Dennis Green are the only coaches to win their first six career matchups with the Bears.

The Packers may need to shuffle their offensive line again as they prepare to visit the Baltimore Ravens on Sunday.