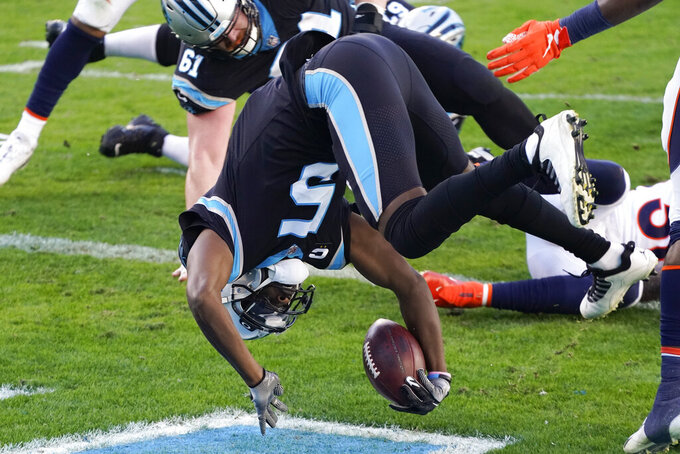 CHARLOTTE, N.C. (AP) — Thirteen games into the season and the Carolina Panthers are still trying to figure out how to win close games.

The Panthers botched another great opportunity Sunday when they couldn’t pick up a first down on their final possession, turning the ball over on downs and losing 32-27 to the Denver Broncos.

It marked the seventh game this season where quarterback Teddy Bridgewater has had the ball in his hands with less than 4 minutes remaining and a chance to help his team tie or take the lead — only to come up short.

“It's going to continue to bother you until you actually excel in that situation,” Bridgewater said. “If we could just become a better situational football team, starting with me, I think we could really do some great things.”

But the great things haven't happened so far, raising some questions about Bridgewater's long-term future as the Panthers starting quarterback. So far, he's 3-9 as a starter after signing a three-year, $63 million contract this offseason.

Panthers first-year coach Matt Rhule threw his support behind Bridgewater, saying he “absolutely” believes he can be the guy to help Carolina build a winning program — but he quickly added that the QB can't do it alone.

The final drive was a disaster.

After scoring on three consecutive drives, the Panthers appeared to be in good shape after getting the ball at their own 27 with 2:48 left in the game and down 32-27. But Bridgewater took a 6-yard sack on first down and completed an 8-yard pass inbounds on second down.

That's when a chaotic situation ensued with the Panthers rushed to the line to get a play off before the 2-minute warning — one that resulted in an costly incompletion.

Rhule, who didn't have any timeouts at his disposal, said he never wanted that play run and would have preferred for the clock to run down to 2-minute warning and get reorganized.

After the timeout, Bridgewater faced a fourth-and-8, was forced out of the pocket and threw underneath the coverage to Curtis Samuel, who was tackled for a 1-yard gain, turning the ball over on downs.

“Maybe he’s thinking (Samuel) outruns him and it’s a first down,” Rhule said. “But those were plays that were not good enough plays to win the game.”

And those are the type of plays that have resulted in the Panthers (4-9) losing seven of their last eight games.

“It comes down to us making the plays when the plays matter,” Rhule said. "We just have to execute. There is not much else to say other than that. We have to get the job done. We took a sack. Just a bunch of mistakes. We have to play better when it matters.

But Rhule said he's not giving up on this team and building for the future.

“I’m going to keep coming to work and keep fighting, scratching and clawing to get guys to understand that what you do really matters,” Rhule said, “You say, ‘Oh, my bad.’ You can only say that so many times. ... Even when it seems mundane or even when it seems trivial, you have to go do your job for us to win. That’s where we are. I don’t believe in panic. I don’t believe in huge, huge, huge changes in the middle of the season. I think you go through the season and you try to do what you do better."