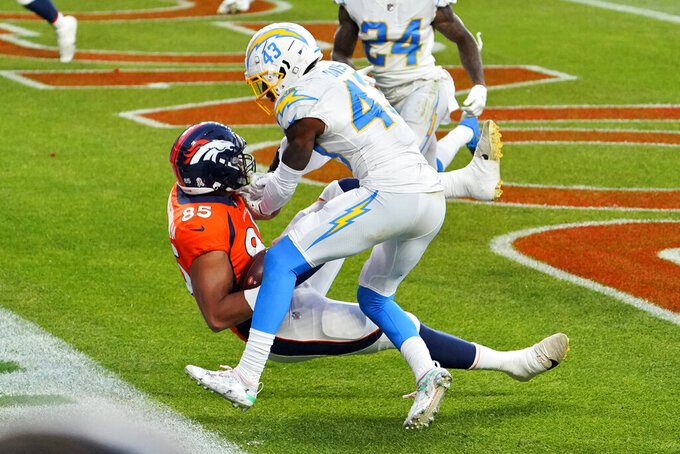 ENGLEWOOD, Colo. (AP) — Rookie tight end Albert Okwuegbunam is out for the year after tearing his right ACL in the Denver Broncos’ loss at Atlanta on Sunday.

“The fortunate thing of it was it’s just the ACL,” coach Vic Fangio said Monday. “Many times when you get an ACL it involves some other ligaments. So, his rehab and repair should go clean and he should be back as good as new next season.”

Okwuegbunam (pronounced owe-COO-ay-BOO-num) and quarterback Drew Lock had a built-in chemistry from their time together at the University of Missouri, and it showed during red zone drills at training camp when the two hooked up time after time for touchdowns.

Okwuegbunam, who caught 17 TD passes from Lock in their two years together in college, cracked the Broncos game day lineup a month ago and had 11 receptions for 121 yards and a touchdown.

Okwuegbunam, a fourth-round draft pick, caught two passes for 45 yards in his NFL debut at New England last month, but he failed to haul in four other passes from Lock.

After that day, however, he caught every pass thrown his way, including a team-high seven for 60 yards in a loss to Kansas City.

He caught his first career touchdown pass to help the Broncos roar back from a 21-point deficit to beat the Chargers two weeks ago.

He was injured on his lone catch Sunday, a 7-yard play in Denver’s 34-27 loss at Atlanta.

That leaves Nick Vannett as the only healthy tight end, although Troy Fumagalli, who was waived by Denver on Sept. 5, is a potential reinforcement.

“We’ll see what kind of shape he’s in and get him through the COVID protocols and see if it’s a good fit,” Fangio said.

And he said he’s hopeful starting cornerbacks Bryce Callahan (ankle) and A.J. Bouye (head), who were out Sunday, will return this week when the Broncos (3-5) visit the Raiders (5-3).