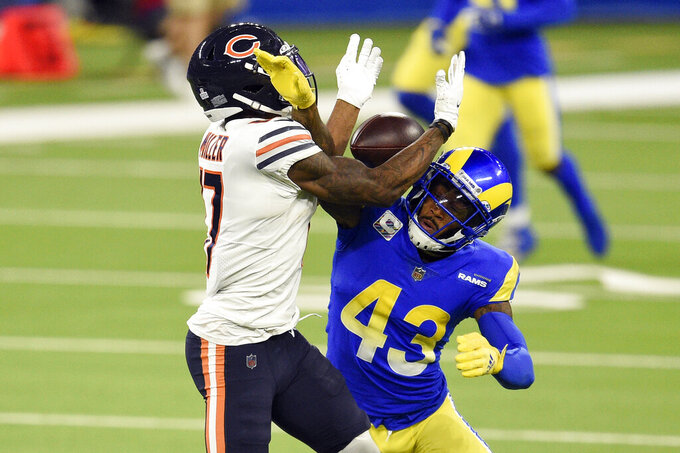 FILE - In this Monday, Oct. 26, 2020 file photo, Los Angeles Rams safety John Johnson III, right, breaks up a pass intended for Chicago Bears wide receiver Anthony Miller during the second half of an NFL football game in Inglewood, Calif. The Cleveland Browns made their agreement with free agent John Johnson III official on Wednesday, March 17, 2021 adding the safety to a secondary that was ravaged by injuries in 2020 and lacked a seasoned leader.(AP Photo/Kelvin Kuo, File)

CLEVELAND (AP) — There's still work to be done with the front of Cleveland's defense. The back just got a whole lot better.

The Browns made their agreement with free agent John Johnson III official on Wednesday, adding the safety to a secondary that was ravaged by injuries in 2020 and lacked a seasoned leader.

Johnson spent the past four years with the Los Angeles Rams. He led them with 105 tackles last season and had one interception for the NFL's top-rated defense.

“Really excited about what John Johnson is going to bring to our defense and our back end in particular,” Browns coach Kevin Stefanski said. “He’s a dynamic player that will fit in well with our group. On top of that, I’m excited about the person, as much as I am about the player.

"He was the captain of the team out there in Los Angeles at such a young age and all the people that I’ve spoken to about him consistently rave about the person that he is and the leader he is for a football team, so we couldn’t be more thrilled to add him to the team.”

Johnson agreed on Monday to a three-year, $33.75 million contract that included $24 million guaranteed.

The Browns also announced their agreement with defensive end Takk McKinley. He’s getting a one-year, $4 million from Cleveland, which tried three times to claim him off waivers last season but couldn’t land the 2017 first-round pick.

And Wednesday night, the Browns reached an agreement with wide receiver Rashard Higgins, one of quarterback Baker Mayfield's favorite targets, on a one-year, $2.3 million contract. The popular Higgins tested free agency before returning to Cleveland.

After his 2019 season was limited to six games by a shoulder injury, Johnson rebounded by not missing a play in the Rams' 16 regular-season games and two playoff games. He was one of just four safeties in the league to not miss a play.

“John has a diverse skillset so we’re excited about his versatility. He can do a bunch of different things, that will allow us to expand our packages to see where he fits in,” Stefanski said. “Versatility is a big part of where we want to be.”

McKinley had 13 sacks in his first two seasons with Atlanta, but his production fell off and he was released after four games last season as he dealt with a groin injury. He had been with the Raiders after failing physicals with Cincinnati and San Francisco.

The Browns see potential in the 25-year-old McKinley, who will start with a clean slate under Stefanski.

“Takk is a skilled young player with tremendous upside,” Stefanski said. “We like his pass rush ability and the way he has gotten after the QB throughout his young career. Defensive line was a position that we felt we wanted to address during free agency, and we are excited to add Takk and the impactful tools he possesses to the group that will help make the plays we need along the line.”

The Browns showed interest in star J.J. Watt before he signed with Arizona. They were expected to make a run at one of the big-name free agent edge rushers in free agency to pair with All-Pro Myles Garrett.

However, that didn't happen, and the Browns will now either look to add another veteran lineman in the coming days or perhaps use the No. 26 pick in the draft to bolster their pass rush.

NOTES: LB Malcolm Smith will re-sign with the Browns on a one-year deal. Smith, the Super Bowl 48 MVP, signed with Cleveland during training camp last summer and was an unrestricted free agent. He started four games and finished with 78 tackles and an interception.