Browns to face Jets team that has finally achieved liftoff 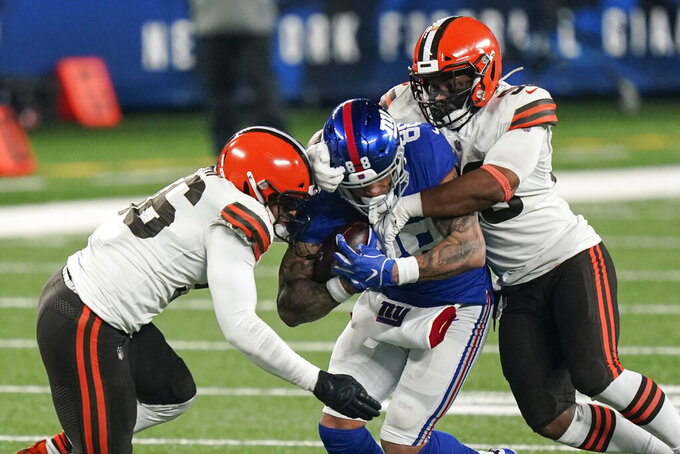 CLEVELAND (AP) — The Browns are heading back to the New York area for their second visit around Christmastime. There won't be any holiday-season sightseeing in Manhattan this time, either.

And suddenly, it doesn't look like it's going to be any kind of vacation.

After shocking the Los Angeles Rams, and in the process possibly costing themselves a chance to draft Clemson quarterback Trevor Lawrence with the No. 1 overall pick next year, the Jets (1-13) are no longer winless.

They may even be a little dangerous.

“Very quickly when you turn the tape on from their last game, you understand what you are getting yourself into,” Browns coach Stefanski said Wednesday. “They have talented players.”

The stakes are high for the Browns (10-4), who beat the Giants 20-6 on Sunday night to tighten their grip on a wild-card playoff spot. Some other scenarios have to unfold, but Cleveland, just three years removed from going 0-16 and now nipping at struggling Pittsburgh's cleats in the AFC North, can clinch its first postseason berth since 2002 on Sunday.

But they have to beat the Jets first.

New York's 23-20 win over the Rams shocked the NFL, angered the Jets' already frothing fan base and got the Browns' attention — especially that of quarterback Baker Mayfield, who is impressed with New York's defense.

“They play really hard, to be honest with you,” said Mayfield, who has 10 TD passes in his past four games. "Up front, I know (DL Quinnen) Williams is out, but they are pretty stout. They are different than the Giants front. The Giants have some bigger guys and some anchors.

"These guys are a little bit more speed rushers and powerful. They play really hard. They fly to the ball. You can tell that they want to bully you and they want to play physical ball. It was very apparent when you put on the Rams tape.”

Stefanski has spent most of his first season preaching to his players the importance of focusing on the here and now. Ask any of the Browns any week about any opponent and you'll hear the same response: “We just want to go 1-0.”

Although there may be some visions of wild cards dancing in the Browns' heads with Christmas approaching, Stefanski is certain they won't take the Jets lightly.

At least he's hoping they don't.

“We had good meetings this morning introducing them to this team," he said. "Again, put the tape on and watch that game from last week, and you will very, very quickly understand what is required this week.”

The Jets went out to California last week and didn't play like they were tanking for the top pick.

Against the Rams, New York forced turnovers, embattled quarterback Sam Darnold avoided mistakes and the Jets held on after nearly blowing a 17-point lead to end any discussion about adding another zero to 2020.

As they close in on a playoff spot, the Browns are dealing with some distractions. Their turnaround has led to national attention, and a team once laughed at for its annual ineptitude is being taken seriously.

Mayfield was asked if the Browns have to guard against the hype going to their heads.

“I would say yes,” he said. "But this team did not listen to it when everybody threw us in the trash, so, no.”

NOTES: DT Sheldon Richardson didn't practice, but Stefanski expects him to play after he injured his neck against the Giants. ... S Ronnie Harrision returned after missing three games with a shoulder injury sustained while making a tackle against the Jaguars on Nov. 29. ... RG Wyatt Teller remains out with an ankle sprain, and it's likely rookie Nick Harris will make his first start Sunday. Harris came in against the Giants played well after Chris Hubbard, who was filling in for Teller, suffered a serious knee injury on the second snap.