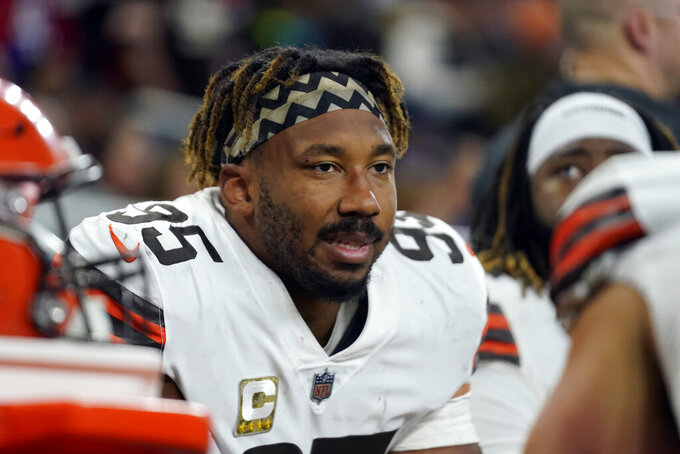 Cleveland Browns defensive end Myles Garrett sits on the bench during the first half of an NFL football game against the Buffalo Bills, Sunday, Nov. 20, 2022, in Detroit. (AP Photo/Paul Sancya) 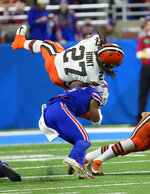 As his teammates headed toward the locker room Sunday after losing in Detroit, Garrett lingered alone on the bench, slowly peeling tape off his wrists while contemplating another game that didn't go Cleveland's way.

The Browns' season has completely unraveled — from bad to broken.

“We are too good of a team to have this record that we have right now," Garrett said.

Following a familiar pattern, Cleveland got off to a good start before too many mistakes and an inability to stop the run resulted in a 31-23 loss to the Buffalo Bills, who dug out of the deep snow at home and plowed through the Browns.

The playoffs are a pipe dream. At this rate, the Browns (3-7), who have dropped six of their last seven games, will be fortunate to avoid another double-digit loss season, something that has been commonplace since the team's expansion rebirth in 1999.

But perhaps more troubling, Garrett and safety Grant Delpit were among the players who questioned the readiness and preparation of Cleveland's defense, criticism indirectly pointed at teammates as well as coordinator Joe Woods, who has been under fire for weeks.

“When you're 3-7, there's frustration,” Stefanski said, addressing his players' postgame comments. “That's what we are today, 3-7. The bottom line is every person in this building — players, coaching staff and you name it — have to have that attitude of fixing anything that needs to be fixed.”

There's widespread damage, but especially for a defense that hasn't come close to meeting expectations and continues being bullied. Hardly known for their running game, the Bills gained 171 on the ground while controlling the line of scrimmage.

Woods' failure to correct the run defense doesn't bode well for him returning next season or even making it until the end of this one.

“Joe’s a great D-coordinator,” Ward said. “We’re all in this together. If something happens out there, it’s not just Joe, he didn’t just call a bad call or this one guy just messed up. Everyone makes mistakes here and there. We just got to try to find a way to put it all together.”

With the exception of an Oct. 31 win over Cincinnati, a victory that seems ages ago, the Browns haven't played a complete game. It's why players are exasperated and beginning to express their feelings publicly.

That's never a good sign, but tight end David Njoku remains hopeful the season can be salvaged over the final seven games.

“It's far from over,” he said. "We have fighters on this team, and we’re not just going to turn our backs out for anybody. Doesn’t matter who it is. I’ll be damned to see anybody just be like ‘OK, well that’s it.’

“Nah, not here. Not right now. So this one hurts, this game hurts. We had the potential to win and we didn’t, so obviously it hurts, but this season is far from over. We’re not just going to give up for anybody.”

Cleveland's passing attack is on target. Quarterback Jacoby Brissett passed for 324 yards and three touchdowns in his penultimate start before Deshaun Watson returns from his 11-game NFL suspension.

Brissett has done a nice job setting the table for Watson, who will start Dec. 4 in Houston.

See above. The defense isn't holding up its end of the bargain, so it's no wonder players are beginning to bark and Woods is in trouble. The Browns have tweaked their practices, scheme and personnel and still aren't making progress.

There was one bright spot on defense: Second-year linebacker Jeremiah Owusu-Koramoah had his best game this season, recording 12 tackles. Owusu-Koramoah missed the previous two games with a knee injury.

“Played sideline to sideline,” Stefanski said. “Wasn’t perfect. There are plays that I know he wants back. Gave great effort.”

Plenty of candidates. Rookie kicker Cade York had his third field-goal attempt blocked by the Bills. Stefanski said it wasn't a protection problem, inferring a trajectory issue for York, who has plenty of leg strength and needs to develop touch.

Starting center Ethan Pocic will be sidelined for weeks with a knee injury sustained on the opening drive Sunday. The loss of Pocic forced guard Hjalte Froholdt in at center because backup Michael Dunn went on injured reserve last week.

Froholdt technically is Cleveland's fourth-string center after Pocic, Dunn and projected starter Nick Harris, who sustained a season-ending injury in the exhibition opener.

A home date against the NFC South-leading Tampa Bay Buccaneers, who are coming off their bye week.