Browns get to practice as 'weight' of Steelers game sinks in 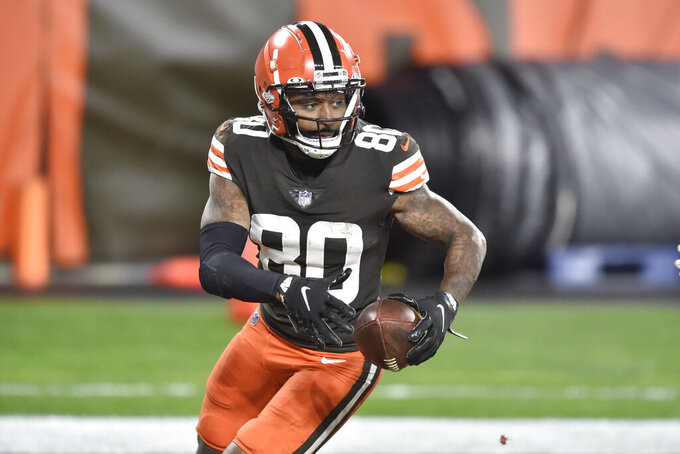 Cleveland Browns wide receiver Jarvis Landry (80) runs with the ball during an NFL football game against the Baltimore Ravens, Monday, Dec. 14, 2020, in Cleveland. After days of positive COVID-19 tests, disruptions and delays, the Browns found some normalcy and got to re-open their facility on Friday, Jan. 1, 2021, to resume getting ready to play the Pittsburgh Steelers and possibly end a postseason drought stretching back to 2002. (AP Photo/David Richard)

CLEVELAND (AP) — The Cleveland Browns rang in the new year by practicing. With everything else that transpired over the past week, that was a major victory.

They'll go for an even bigger one Sunday.

After days of positive COVID-19 tests, disruptions and delays, the Browns found some normalcy and reopened their facility on Friday to resume getting ready to play the Pittsburgh Steelers and possibly end a postseason drought stretching back to 2002.

A season like no other is either going to end Sunday with a loss and bitter disappointment for the Browns (10-5) or continue with a victory that would launch them into the AFC playoffs for just the second time since their 1999 rebirth.

“I feel the weight of it,” wide receiver Jarvis Landry said.

It's been a heavy week for the Browns. They've had to shuffle players on and off the COVID-19 reserve list and will be missing at least three starters, including top cornerback Denzel Ward, when they face the AFC North champion Steelers (12-3).

For the first time in three days, they didn't have any positive tests and now need to get through the next hours unscathed. Last week, their trip to play the New York Jets turned into a lost weekend after a positive test for linebacker B.J. Goodson led to four wide receivers, including Landry, being held out as close contacts.

Landry, who missed the first game of his career, and the other wideouts are back. But the group will be missing assistant coach Chad O'Shea on Sunday because he tested positive for COVID-19.

Coach Kevin Stefanski will again call on chief of staff Callie Brownson to fill in. She became the first woman in NFL history to handle in-game coaching duties on Nov. 29, when tight ends coach Drew Petzing didn’t travel to Jacksonville as his wife gave birth to the couple’s first child.

“We will not miss a beat there,” Stefanski said.

It seems the Browns handled the recent upheaval as well as could be expected. Players have grown accustomed to virtual meetings and adjusting on the fly, so the past few days were nothing out of the ordinary — at least by 2020-21 standards.

“We are where we need to be from a preparation standpoint,” said Stefanski, who named defensive star Myles Garrett captain for the game. “We have not missed a beat in the Zoom meetings and the mental aspect of this. We got our work done Wednesday. We got some extra work done today. I am comfortable with where we are.”

The Browns are also catching a break with Steelers coach Mike Tomlin resting quarterback Ben Roethlisberger along with defensive MVP candidate and league sacks leader T.J. Watt and other prominent starters. The Steelers are trying to get healthy for their first playoff game — which, depending on how things shake out, could be against Cleveland.

But even with backup QB Mason Rudolph leading Pittsburgh's “B” team, the Browns know they've got their hands full as they try to complete a comeback that began after they went 0-16 in 2017.

A win would restore pride to this football-mad city and its beloved franchise.

“That would be special,” said Pro Bowl guard Joel Bitonio, drafted by the Browns in 2014. “You put your heart and your soul and unfortunately your blood and sweat and tears into playing for this team, and they have given you everything.

“You put so much into it and you get a lot out of it, but the end goal is to win Super Bowls. You see guys win it and you see friends win it that you talk to and they have a Super Bowl ring, and you want to be part of that conversation. Our next step is winning this game to get a shot at it.”

After coming to the Browns in a 2018 trade from Miami, the five-time Pro Bowler vowed to change the team's identity.

“All of our dreams and our goals are aligned to be able to play these meaningful games, get into the playoffs and win championships here in Cleveland,” said Landry, who has played in one postseason game in seven NFL seasons. “I think the weight is not just on my shoulders, but it is on everybody’s shoulders.

"Everybody wants this really, really badly.”

NOTES: Stefanski “feels good” that RG Wyatt Teller (ankle) will play after missing the past two games. ... Rookie G Nick Harris (knee) has been ruled out and his loss weakens a group that recently lost Chris Hubbard to a season-ending knee injury. ... LBs Sione Takitaki and Tae Davis (ankle injuries) are questionable as is OL Kendall Lamm (illness).