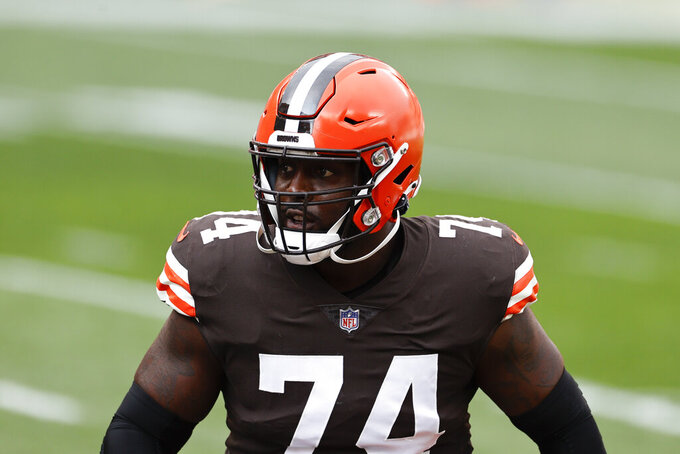 FILE - In this Oct. 11, 2020, file photo, Cleveland Browns offensive tackle Chris Hubbard (74) warms up before an NFL football game against the Indianapolis Colts in Cleveland. Versatile offensive lineman Hubbard's season is likely over after he suffered a serious knee injury early in a win over the New York Giants on Sunday, Dec. 20, 2020. (AP Photo/Ron Schwane, File)

CLEVELAND (AP) — Chris Hubbard was there whenever the Browns needed him. For the rest of this season, they'll have to cope without him.

The versatile offensive lineman is expected to undergo season-ending right surgery after he injured his knee in the opening minutes of Sunday night's win over the New York Giants.

Hubbard, who took a pay cut in the offseason to stay with Cleveland, reportedly suffered torn ligaments and a dislocated knee cap on the Browns second snap. Coach Kevin Stefanski did not confirm the severity of Hubbard's injury reported by NFL Network.

Hubbard was filling in for injured starter Wyatt Teller at right guard against the Giants' talented defensive front. Teller could miss another week with a sprained ankle and will be replaced temporarily by rookie Nick Harris, who came in after Hubbard got hurt.

Hubbard's loss hurts Cleveland's depth. He started at right tackle last season and can also play guard. The 29-year-old is also among the most well-liked players on the Browns.

“He is a true pro,” said Harris, a fifth-round pick from Washington. "He goes out and he executes in practice. He is a hard worker. That is somebody I look up to, try and model my career and my game after. He definitely plays a big role in how I have progressed in practice throughout the season.

"I ask him questions all of the time just about football and just things that he can help me with. He is another great person, a great leader on this team that is huge for us to have.”

Harris came through in a pinch and played well after Hubbard went down.

“It felt good to get out there and run around," said Harris, who had only taken one offensive snap this season before going in. "I didn't even have time to think.”

Stefanski felt Harris more than held his own.

“Did his job. Played hard. Assignment sound,” Stefanski said. “Got people on the ground. Really pleased with how he performed.”

Stefanski also said defensive tackle Sheldon Richardson should be fine after sustaining a neck injury Sunday night. It's not yet known if Richardson will practice this week as the Browns try to get closer to a playoff berth.

Safety Andrew Sendejo remains sidelined with a concussion and is in league protocols.