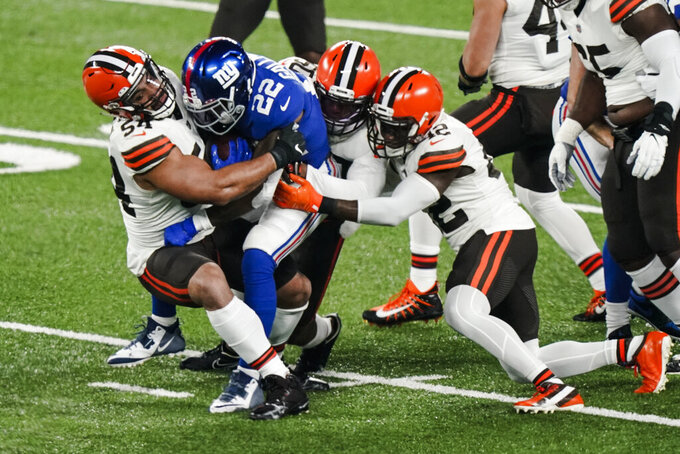 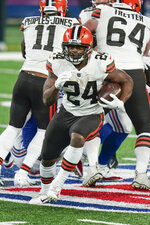 CLEVELAND (AP) — Three years after losing all 16 games, the Cleveland Browns are on the cusp of the playoffs.

An agonizing, and often embarrassing wait is almost over.

For the first time since 2002, when quarterback Baker Mayfield was 7, coach Kevin Stefanski was playing safety at Penn, and Cleveland was in the fourth year of an expansion reboot filled with front-office blowups, draft mistakes and failure, a postseason present awaits.

Bouncing back from a demoralizing loss to Baltimore earlier in the week, the Browns (10-4) displayed their depth and development on Sunday night in a solid 20-6 win over the New York Giants. Cleveland inched closer to quenching the a 17-season drought — the NFL's current longest dry spell.

Holding the AFC's No. 5 position, the Browns may be able to clinch this week when they return to the New York area and face the no-longer-winless Jets. There are too many scenarios and tiebreakers to digest, but it's simple to see the Browns can't afford to lose.

Don't expect Stefanski to be watching the scores from around the league on Sunday.

"I will look at the scoreboard of the Browns vs. the Jets,” he said.

Mayfield continued to play like the franchise quarterback Cleveland hoped he'd be, carving up New York's secondary (27 of 32 for 297 yards) while leading two 95-yard touchdown drives behind an offensive line down to its third-string right guard.

The comfortable win, on the road and in prime time, showed the Browns are getting better each week under Stefanski. He won't allow his team to be satisfied with reaching 10 wins for the first time since 2007.

“Our best football is ahead of us, and we are playing it,” said wide receiver Jarvis Landry, who caught one of Mayfield's two TD passes. "We are really playing it.”

Mayfield is playing better than ever as a pro. In his past four games, he's thrown 10 TD passes, just one pick, and is averaging 308 yards. Beyond his gaudy stats, Mayfield is leading — on and off the field — while helping Stefanski orchestrate a turnaround ahead of schedule.

Stefanski selects a captain before each game. On Sunday, it was Mayfield.

“Baker's a fighter,” Stefanski said. "I thought that was what was going to be required in this game.”

Mayfield has grown. He's taking the Browns with him to new heights.

Cleveland's defense got a needed confidence builder against the offensively inept Giants, who were without starting quarterback Daniel Jones.

The Browns had given up 80 points in their past two games, but top cornerback Denzel Ward's return from injury helped Cleveland stiffen in the red zone — including a stop on fourth down inside the 5 — and held New York to two field goals.

“It is about bend, don’t break,” said star end Myles Garrett. "They got some yardage, but we are trying to keep them off the board. It is nice to keep them out of the end zone, but at the end of the day, a W is a W, however we get it.”

Garrett's still not fully over COVID-19. He added a half-sack late in the game, but the edge rusher couldn't exploit a matchup with rookie left tackle Andrew Thomas.

Garrett said he struggled to catch his breath during the game and had a postgame coughing fit in the locker room.

"Hopefully, if we make it to the playoffs, I can try to get myself to as close to 100 percent as possible,” he said.

With starting safety Andrew Sendejo out with a concussion, Karl Joseph stepped in and made several contributions.

Joseph came up to make tackles, including when the Browns stopped the Giants near the goal line. He also recovered an onside kick and ran Cleveland's punt team, a role he never performed before.

“Made plays on the football that we needed him to make,” Stefanski said.

Linebacker Mack Wilson, who has started seven games this season, was a healthy scratch. He was replaced by rookie Jacob Phillips.

Stefanski was asked what Wilson needs to do to get back in the rotation.

“Nothing that anybody else has to do,” he said. "Practice hard, be ready to go.”

Offensive lineman Chris Hubbard will likely miss the remainder of the season after suffering a knee injury on Cleveland's second play. Hubbard was filling in for starter Wyatt Teller, who is also expected to miss this week with a sprained ankle.

Rookie Nick Harris came in and played well after Hubbard went down.

The suddenly dangerous Jets, who avoided 0-16 infamy by beating — and embarrassing — the Los Angeles Rams. New York's win may have cost it the No. 1 overall pick in next year's draft, but it got the attention of the Browns.

"There is nobody in the NFL who is going to lay down and let you take something from them,” Garrett said.