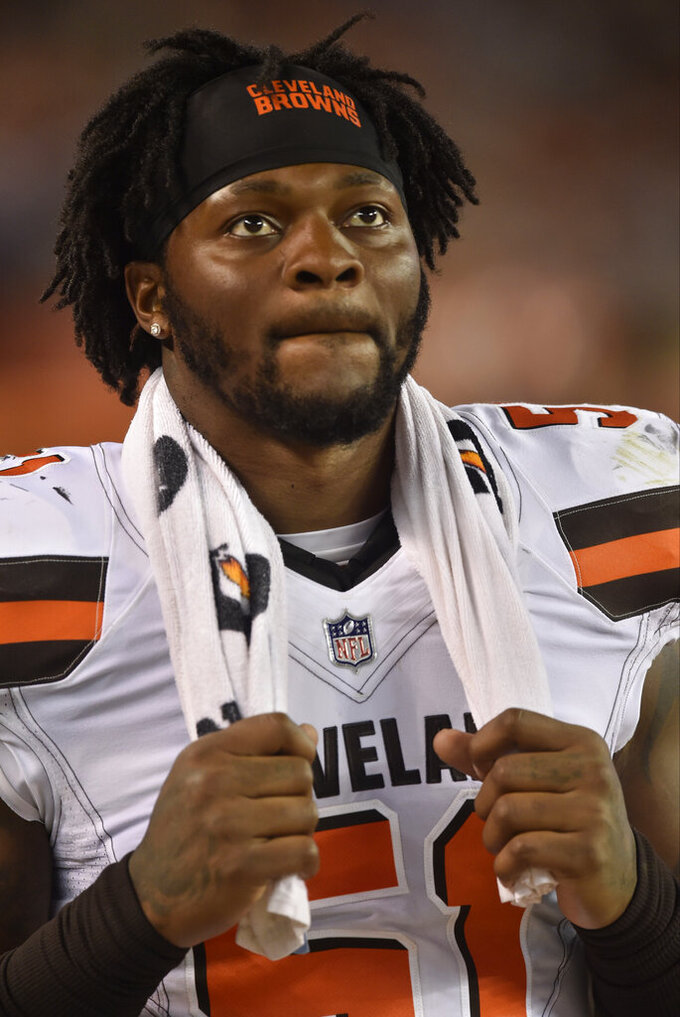 FILE - In this Aug. 10, 2017, file photo, Cleveland Browns outside linebacker Jamie Collins stands on the sideline during the first half of an NFL preseason football game against the New Orleans Saints in Cleveland. The Browns have released Collins on Wednesday, March 6, 2019. Collins had two years remaining on his contract. He was due to make $10.5 million this season and $12.5 million in 2020. (AP Photo/David Richard, File)

CLEVELAND (AP) — Jamie Collins had flashes of brilliance with the Browns. Not nearly enough of them, though.

Cleveland released the veteran linebacker on Wednesday with two years remaining on his contract. Collins never lived up to high expectations with New England or the Browns, who were in line to pay him $10.5 million this season and $12.5 million in 2020.

By cutting Collins, the Browns will save $9.25 million in salary-cap space for 2019, leaving them with around $80 million to improve a roster that went 7-8-1 last season.

The 29-year-old Collins was acquired in a trade midway through the 2016 season from New England in exchange for a third-round draft choice. Collins made 30 starts for the Browns, with 204 tackles, seven sacks and two interceptions. However, the 6-foot-3, 250-pounder wasn't consistent and drew criticism from fans last season for not hustling.

"We want to thank Jamie for his contributions to the Cleveland Browns," Dorsey said in a statement. "These types of decisions are never easy. Jamie is a respected veteran player in this league and we wish him the best as he continues his career."

Collins started all 16 games last season and finished with a team-high 104 tackles, four sacks and one interception. But there were long stretches in which Collins seemed to disappear, and in the end the Browns decided his contract — a four-year, $50 million deal signed in 2017 — didn't match his value.

At the time of his signing, Collins represented another new start for the Browns, who have only made the playoffs once since their expansion reboot in 1999. Now, he's no longer part of a future that appears much brighter if Cleveland has found its franchise quarterback in Baker Mayfield.

Collins' departure could have a major impact on Dorsey's plans in free agency and the draft. The Browns want to improve their front seven on defense and are focused on adding depth on the line and at linebacker.

While this year's college class of linebackers isn't especially deep, there are some good ones available in free agency, including Baltimore's C.J. Mosley, Philadelphia's Jordan Hicks and Minnesota's Anthony Barr.

Dorsey could also try to improve his defense via trade.