Browns staffer Brownson suspended for DUI, will not lose job 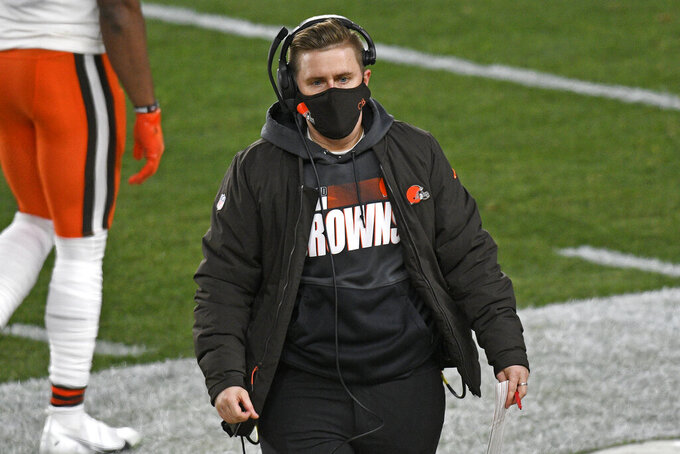 FILE - Cleveland Browns' Callie Brownson walks on the sideline during the first half of an NFL wild-card playoff football game against the Pittsburgh Steelers in Pittsburgh, in this Sunday, Jan. 10, 2021, file photo. Browns chief of staff Callie Brownson has been suspended by the team but will not lose her job after an arrest for drunken driving. Brownson, one of the most prominent females in the NFL, pleaded no contest in court Tuesday, June 8, 2021, in Brunswick, Ohio, for charges related to her arrest on May 27. (AP Photo/Don Wright, File)

BEREA, Ohio (AP) — Cleveland Browns chief of staff Callie Brownson has been suspended by the team but will not lose her job after an arrest for drunken driving.

Brownson, one of just a handful of female coaches in the NFL, pleaded no contest Tuesday in a Brunswick court to charges stemming from her arrest last month. She had her license suspended for one year and will have to take an intervention course.

On Wednesday, Browns coach Kevin Stefanski, who hired Brownson last year and has praised her work, said she has been disciplined by the team. He did not reveal the length of her suspension but said she's going to remain employed by the Browns.

“Extremely disappointed,” Stefanski said following a voluntary practice. “We take these things very seriously. We’re working with the league on appropriate discipline. Callie’s obviously very remorseful and she’s going to learn from this and we’ll support her along the way.”

Brownson was stopped on May 27 for driving 55 mph in a 35 mph zone at 12:27 a.m. According to the police report, an officer detected the smell of alcohol and said she had slurred speech.

Brownson provided a breath sample that showed a blood-alcohol level of .215 — more than twice Ohio's .08 legal limit. She told officers she had “two or three glasses of wine.”

The Browns consulted with the league in determining appropriate discipline for Brownson. NFL spokesman Brian McCarthy said she will not face any further discipline from the league.

Stefanski lauded Brownson's contributions last season as she handled a significant amount of planning during the COVID-19 pandemic.

“She’s extremely remorseful, I’ve spoken to her many times and she’ll learn from this and hopefully we’ll all be in a better place after this,” Stefanski said. “I’m disappointed. She’s disappointed and, again, we’ll work through all the particulars.”

Brownson's primary duty with the Browns is working alongside Stefanski, who began his professional career in a similar role with the Minnesota Vikings. But Brownson's job expanded last season when she became the first woman to serve as an assistant coach during a regular-season game.

When the Browns visited the Jacksonville Jaguars on Nov. 29, Brownson filled in for tight ends coach Drew Petzing, who did not travel with the team after his wife gave birth to their first child.

The 31-year-old Brownson is working with running backs coach Stump Mitchell this season.