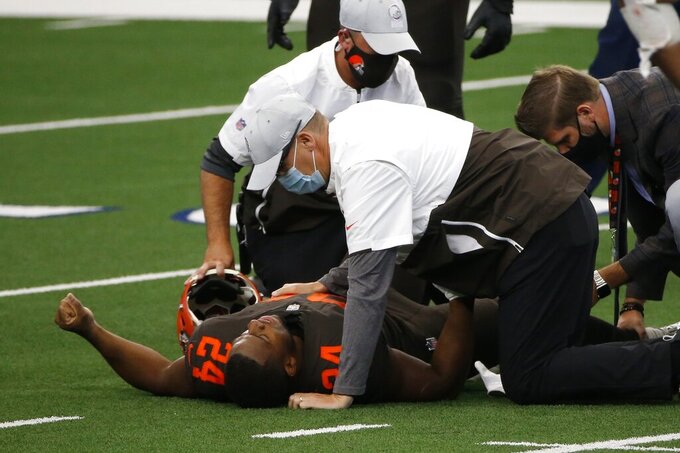 Cleveland Browns running back Nick Chubb (24) receives assistance from team staff after suffering an unknown injury in the first half of an NFL football game against the Dallas Cowboys in Arlington, Texas, Sunday, Oct. 4, 2020. (AP Photo/Michael Ainsworth)

CLEVELAND (AP) — Nick Chubb has been stopped for a while.

Cleveland's powerful Pro Bowl running back will miss “several weeks” with a sprained ligament in his right knee, a major blow to the improved Browns, who are off to their best start since 2001.

Chubb injured his medial collateral ligament in the first quarter of Sunday's 49-38 win over the Cowboys, moving the Browns to 3-1 for the first time in 19 years.

Browns first-year coach Kevin Stefanski said Chubb, the NFL's second-leading rusher in 2019 and one of the league's rising stars, will be placed on injured reserve. Unlike previous seasons, teams can put players on the injured list and bring them back after a minimum of three games.

Stefanski expressed relief that Chubb's injury was not more serious, and said the unassuming 24-year-old does not need surgery.

Stefanski, though, would not speculate on a timetable for Chubb's return to the field.

“We gotta see how it goes,” Stefanski said. "With Nick Chubb I hesitate to put a number of weeks on it. Knowing Nick, he’s going to work very hard in rehab. I know that’s hard to see your teammate go down like that, but knowing Nick he will work his butt off to get back.”

Stefanski downplayed an NFL Network report that Chubb will be out for six weeks, mainly because he respects the 24-year-old’s work ethic.

“Thanks for all the prayers and wishes,” he said. “I’ll be back soon enough. To the bat cave until then.”

It's tough news for the Browns, who will host the Indianapolis Colts this Sunday.

But the team has a more-than-capable backup in Kareem Hunt, a former league rushing champion with Kansas City. Hunt missed practice time last week with a groin injury, but rushed for 71 yards and two touchdowns against the Cowboys.

“He came through pretty good," Stefanski said of Hunt. "That dude’s a warrior. To make it to that game and perform the way he did, team player all the way. Really proud of him.”

Chubb was in pass protection at the end of a play when Dallas defensive tackle Trysten Hill rolled up on the running back's right leg. He grabbed the back of his leg and stayed on the turf in obvious distress as he was being checked.

Chubb walked off the field under his own power while favoring his leg. Chubb suffered a serious injury to his left knee in 2015 while at Georgia.

Even though they were without Chubb for most of the game, the Browns rolled up 307 yards rushing against the Cowboys' leaky defense. Chubb gained 43 before he went out.

“Nick’s tough to replace, obviously," Stefanski said. But we have to make sure we put a game plan together and find a way to move the rock. I trust the guys will step up when they’re called upon.”