Calabrese is the voice in Wilson's ear as Jets QB develops 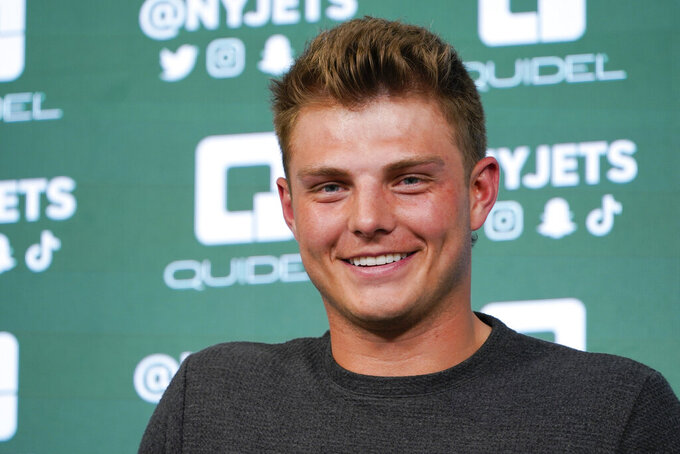 FLORHAM PARK, N.J. (AP) — Rob Calabrese grew up rooting for the New York Jets, a fandom born somewhat out of necessity because it was everywhere he turned.

The Jets' current quarterbacks coach was a wide-eyed youngster in East Islip, New York, when Boomer Esiason was tossing TD passes for New York in the mid-1990s. Everyone in the neighborhood wanted to be like Esiason, including Calabrese.

“It was more so being from Boomer's hometown, it was like I had no choice,” Calabrese said with a laugh. “Like, that's Boomer Esiason, the Jets quarterback. And I instantly fell in love with the Jets.”

Fast forward nearly 30 years, and Calabrese is one of his favorite NFL franchise's most important people.

Calabrese, now 32, is in charge of helping develop Zach Wilson — a second-year signal caller whose development is crucial to the Jets getting back to respectability and ending an 11-year playoff drought.

“Be all-in on this process,” Calabrese said of his message to Wilson. “Don’t look too far ahead on anything right now. Every single day you come to work, get better. There’s things that he needs to work on from last year moving forward to this year. So it’s just a process.”

With Calabrese's voice leading the way.

At this time last year, Calabrese was one of a few coaches in Wilson's ear — with offensive coordinator Mike LaFleur and pass game specialist Greg Knapp among the others. Shortly before training camp, Knapp died from injuries suffered when he was hit by a car while bicycling at his home in California.

Matt Cavanaugh was eventually brought in to help replace Knapp as a veteran coach with a quarterback's mind. The Jets also added John Beck, Wilson's personal quarterbacks coach, during the season.

As Wilson went through struggles early in his rookie season, there was plenty of feedback from the coaches on how to get things right. But as the year went on, Calabrese — a first-year QBs coach — became the main voice to deliver the messages from LaFleur and the other coaches to the young quarterback.

That will continue to be the case this season with Cavanaugh not back and Beck returning to his private business.

“In the second half of the year last year, when we had all the different coaches in there, it was really Rob who was the lead voice and you see this year a lot more confidence, a lot more conviction,” head coach Robert Saleh said. “Him and Mike having more conversations, obviously it’s more one-on-one. I don’t know if ‘streamline’ is the word, but it’s more focused, I guess you could say.”

Calabrese and Wilson spend as much time together as possible, going over the defensive schemes, watching tape and getting to know each other even more — and developing a trust that will carry onto the field.

“We kind of were in the same boat last year, both myself a first-year position coach and himself a rookie,” Calabrese said. “And going through growing pains and living it together. So that’s going to happen and the relationship is going to be stronger because of that.”

Wilson finished last season with nine touchdown passes and 11 interceptions in 13 games, hardly awe-inspiring numbers. But he wasn't picked off in his final five games — a sign of optimism that the game was slowing for the young QB.

Wilson has come back this offseason bulked up a bit, focused on eating better and getting stronger. His grasp on LaFleur's playbook is much improved. Wilson's confidence has also grown noticeably, with several teammates and coaches remarking about the way he has carried himself this spring.

When asked why Jets fans should be optimistic about Wilson, Calabrese went down a lengthy list of reasons.

“Obviously, you see what you see on tape with how talented he is,” Calabrese said. "He is a football player, he’s a quarterback that can make any throw on the field, he can extend plays with his feet. And now, he’s going to come back and be able to play the quarterback position in that way. As a rookie, that’s a thing that you have to learn the hard way. It’s not making a play every single down, but you've got to make the right decisions.

"As Jets fans, you really want to see that so we can be in the game in the fourth quarter and let his talents take over when those times come."

Calabrese was a star at East Islip High School — where he broke some of Esiason's records — and then at Central Florida. He started his NFL coaching career with Denver as the offensive quality control coach from 2019–20 following stints as a high school assistant and then as an assistant at UCF and Wagner.

He joined Saleh's initial staff last year and had an enticing offer from Kentucky this offseason to be the Wildcats' offensive coordinator.

Calabrese turned it down. He has unfinished business with Wilson and the Jets.

“I've always wanted to leave my footprint on something,” Calabrese said. “Just being from this area and growing up a Jets fan, with Zach, I see the potential he has. And what he went through last year, myself included, I really wanted to get into Year Two and see what we can do this year.”