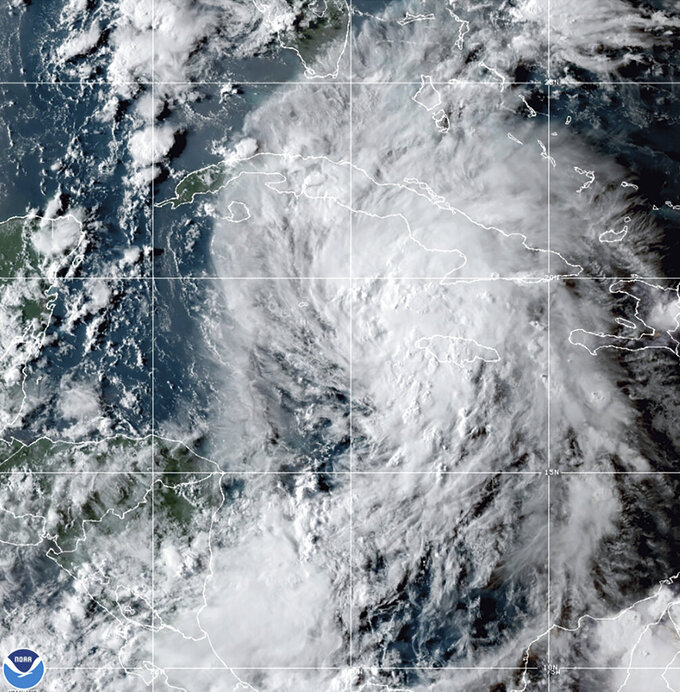 This GOES-16 East GeoColor satellite image taken Thursday, Aug. 26, 2021, at 10:20 p.m. EDT, and provided by NOAA, shows Tropical Storm Ida in the Caribbean Sea. Tropical Storm Ida formed in the Caribbean on Thursday and forecasters said its track was aimed at the U.S. Gulf Coast, prompting Louisiana's governor to declare a state of emergency and forecasters to announce a hurricane watch for New Orleans. (NOAA via AP)

NEW ORLEANS (AP) — The New Orleans Saints canceled their home preseason game set for Saturday against the Arizona Cardinals because of the potential for Hurricane Ida to batter Louisiana’s coast with wind as high as 140 mph by Sunday.

After initially moving kickoff up by seven hours, the Saints announced the subsequent decision Friday night to cancel the game came after consultation with city officials in New Orleans, Gov. John Bel Edwards, the National Weather Service, The Department of Homeland Security and the NFL.

Ida struck Cuba on Friday showing hallmarks of a rapidly intensifying storm that could speed across warm Gulf waters and slam into Louisiana as a Category 4 hurricane on Sunday, the National Hurricane Center warned.

If so, the storm would strike the Louisiana coast 16 years to the day after Hurricane Katrina leveled parts of the Mississippi Coast and ruptured storm protection levees around New Orleans on Aug. 29, 2005, causing about 80% of the city to be affected by flooding that in some neighborhoods left only roofs above water.

The Saints also had a preseason game the Saturday night before Katrina struck little more than 24 hours later and the team wound up being displaced to San Antonio for all of the 2005 regular season. The Saints played just four home games in Louisiana that year, all at LSU's Tiger Stadium in Baton Rouge. The Saints also played three home games in San Antonio's Alamo Dome and one in Giants Stadium.

New Orleans' levee system has been rebuilt and upgraded since Katrina, but marshlands that historically helped protect the city from storm surge have steadily thinned because of coastal erosion, and the city's pumping system has struggled in recent years to handle heavy rains before it fills streets and sometimes invades homes and businesses in certain neighborhoods, some of which lie below sea level.

Saturday's game with Arizona was to be the preseason finale for both clubs, a day after an Associated Press source confirmed an earlier ESPN report Friday that the club had decided to make Jameis Winston its Week 1 starter at quarterback.

The Saints are scheduled to open the regular season in the Superdome against Green Bay on Sept. 12.