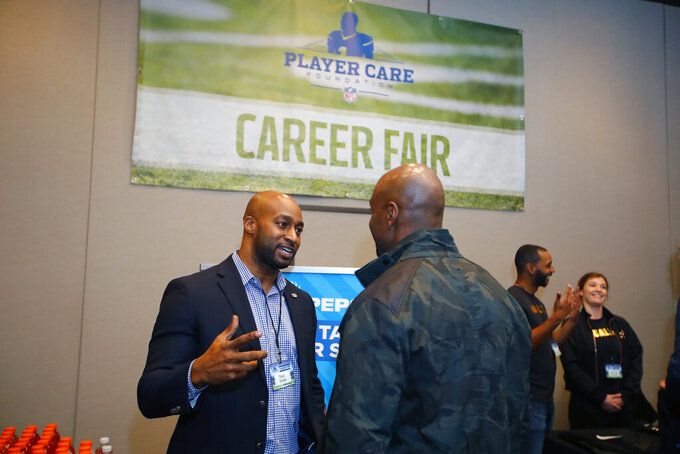 Former NFL player Tony Dixon, left, speaks with an unidentified person at the NFL Player Care Foundation Career Fair in Atlanta on Friday, Feb. 1, 2019. The NFL Player Care Foundation was established in 2007 with the mission of helping former players improve their quality of life. More than 40 national businesses took part in February, including PepsiCo, where Dixon has been on staff since 2009. (AP Photo/Todd Kirkland)

The premise that every NFL player leaves the sport a rich man is as accurate as believing a football is round.

Yes, there are hundreds of players who earn millions upon millions of dollars — the guys at the top of the profession whose careers last far longer than the average.

Then there are the thousands of men who in their 20s or early 30s leave the game with a nice enough nest egg, but must find a way to support themselves and their families for the rest of their lives.

The NFL Player Care Foundation, established in 2007 with the mission of helping former players improve their quality of life, has created the Super Bowl Career Fair. Due to the COVID-19 pandemic, the third edition this year was conducted remotely through a career portal that allows employers to post potential employment opportunities directly to those former players. More than 40 national businesses took part in February, including PepsiCo, where Cleo Lemon, a quarterback with three NFL teams has been employed since last September, and Tony Dixon, a four-year defensive back with the Cowboys, has been on staff since 2009.

In his current role as director of customer management, Dixon helps recruit ex-NFLers to his company at the career fair. For years, he noticed a reluctance on the part of Fortune 500 corporations to go after athletes.

“That is the gap that we have. The NFL is a wonderful experience to have, but if you are not in the top percentage of most teams, you do not have facial recognition and might not have name recognition.”

And those former players have had to fight against preconceived notions that they are nothing more than athletes. That they aren't intelligent enough. That they don't possess those transferable abilities.

“I span the gap as a person who has been there and done that and can relate to their experience,” Dixon adds. “I don’t care how many years they played, they wanted to play more. I don't care how much money they made, they wanted to make more. Let’s talk about transferable skills that you have. Most people have no clue how to bring it out.”

The career fair helps on both levels. The ex-players get a chance to present their talents that are applicable in the business world. Companies such as Microsoft, SiriusXM, Lowe's, and FedEx Ground — plus the NFL itself and nine teams — have organized opportunities to interview and recruit in a large scope.

Lemon held some NFL coaching internships and was a quarterbacks coach at Jacksonville State from 2017-2020. The work commitments took him away from too much family time, so he attended last year's career fair in Miami.

“I went with an open mind and with my resumes, and really the idea of what I was looking for, but I didn’t know what would be offered or what the opportunities would be,” Lemon says. "The career fair was very informative.

“For me, what it has represented is a chance to put myself out there for companies who are looking for young and talented individuals trying to expand outside their comfort zone ... and get to know people from different organizations and see that what they were doing aligned with my principles. The fair was a tool that helped me take advantage of my opportunities.”

He was hired by PepsiCo out of the Miami fair.

Tony Simmons, a receiver in the NFL, CFL and Arena Football as well as a former college track star, wouldn't seem to have needed the career fair after building his own successful business, 6 Point Athletics. But the pandemic has played havoc on the fitness training industry, and with this year's fair held remotely, Simmons signed up.

He already has a Masters degree in Project Management and has worked on six continents. Yet Simmons prospered from attending.

Simmons talked to PepsiCo, Microsoft, SiriusXM and EA Sports among others. He believes the vigor of a former pro athlete is advantageous in any interviews — and on the job.

“It's nice to have people see you as Tony, as something different and with something that you are interested in, not as a football player,” he says. “They loved the mentality of the athlete. Our energy levels are really high, we can learn anything. We learned a 150-page playbook in a week, so if we can learn highly complex plays, we can learn code and all this stuff.”

A total of 153 former players had at least one conversation with a potential employer. None of those might have happened without the NFL Player Care Foundation Super Bowl Career Fair.

“I looked at the NFL as a head start on life, to do something I love, something I trained my entire life to play in the NFL,” Lemon says. "I made lifelong friends, but it is a small portion of your life.

“Job shadowing and internships and setting them up, the transition can be hard and finding out what you really want to do. I think the NFL is doing a great job of preparing guys for life after football.”