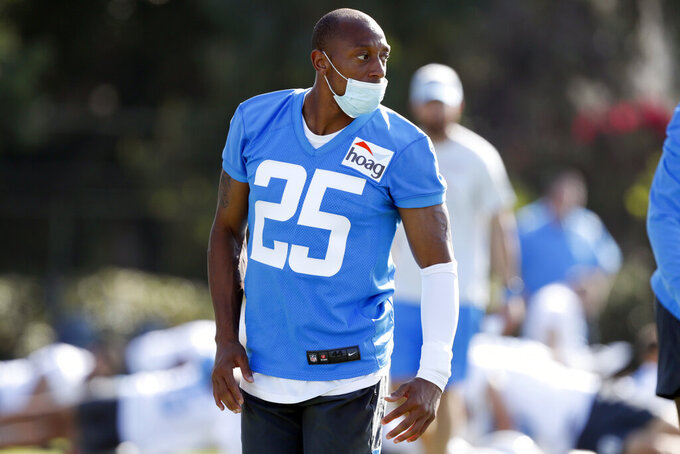 COSTA MESA, Calif. (AP) — No one on the Los Angeles Chargers has been exempt from having to pick up on the intricacies of a new position with a new coaching staff, even a veteran defensive back entering his 11th season in the NFL.

Chris Harris Jr. has spent time at safety during the first three training camp practices. He said it's the first time since his rookie season with Denver in 2011 that he is seeing snaps at the position.

“I’m playing three positions, so now I need to learn the safety position, too. That’s something new for me that I haven’t done in my career,” Harris said. “Usually, I come out here and just play corner or nickel and I’m thoroughly comfortable with that. Now, I have to move around a lot more, get the communication right, learn how my corners are playing and things like that.”

Harris has experience in the system new coach Brandon Staley and defensive coordinator Renaldo Hill are employing. He spent time with both coaches when they were at Denver and the scheme has some similarities to what he played when John Fox and Vic Fangio were coaching the Broncos.

The biggest goal is to put Harris and safety Derwin James in as many positions as possible to keep opponents off balance. Harris can line up at left and right corner, slot corner or safety while James can play all those spots as well as line up at linebacker in nickel situations or even as an edge rusher in certain blitz packages.

Staley did say, though, that Harris' natural position is as the slot corner.

“Linking up with him here, we have more of a complete secondary here where he can thrive in his natural space," Staley said. "The other thing is, he’s like another defensive coordinator. This guy thinks like a coach. When you’re with him, he’s able to tell you the truth quickly."

When Harris signed with the Chargers last season, he said being able to play with James was one of the big reasons. But they didn't get a chance last year after James suffered a season-ending knee injury during training camp.

Both being healthy will be paramount to the Chargers' hopes of getting back to the playoffs for the first time since 2018. Harris missed seven games last season due to a foot injury.

Harris has been giving advice to James on playing nickel corner while James has been sharing safety tips.

“We’re just trying to figure out ways to fill that gap, so that’s something new. I get to use a deeper part of the field, because usually I’m in the box like a linebacker. I’m seeing it that way — how to play the middle field — and reading the quarterbacks a lot more,” Harris said.

"It just adds more speed. We play both the run and the pass in those packages. They’ve got five defensive linemen that the offensive line is going to have an issue blocking. It’s going to be very tough for offenses.”