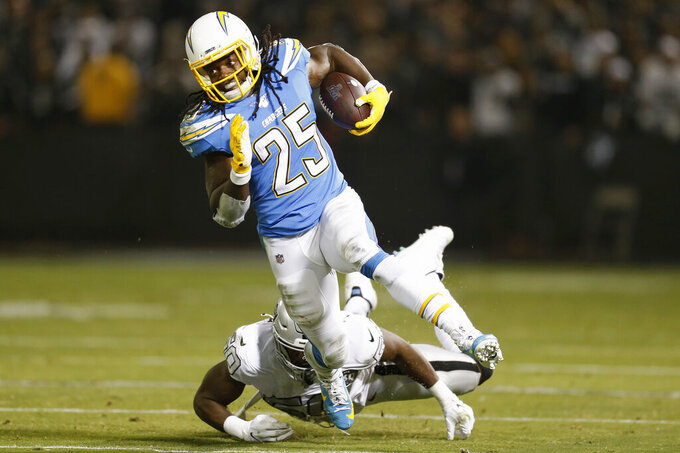 COSTA MESA, Calif. (AP) — The Los Angeles Chargers' brief winning streak evaporated into Oakland's Black Hole on Thursday night — and it might have swallowed their hopes for a return to the playoffs, too.

A 26-24 defeat to the Raiders ended Los Angeles' two-game spurt and dropped the Bolts to 4-6 for the second time in three years. Now they're facing a rocky schedule and long odds of returning to the postseason a year after winning 12 games.

Four of their final six games are against teams over .500. Two are against Kansas City, including a matchup Nov. 18 in Mexico City. Even if the Chargers do make a run, they aren't likely to win any tiebreaker thanks to lousy marks in the conference (2-5) and division (0-2).

"We have to work our tail off to reach our goal, which is to get back to the tournament. I don't know if we can lose another game, and they understand that," coach Anthony Lynn said.

Los Angeles won five of six to finish 9-7 in 2017 but was on the wrong side of a four-way tiebreaker for the two wild cards.

After the midweek loss to Oakland, the Chargers get extra time to prepare for the Chiefs, which Rivers sees as an advantage.

"They have a different defensive coordinator. It won't be the same that we had there for the last six or seven years. We won't be as familiar," he said. "I think the rest will be good and get a little bit of a head start of preparation."

The running game is back to being one of the team's strengths after two straight 100-yard games for the first time since the first two games of the season. The Chargers ran for 146 yards and averaged 4.9 yards per carry as new coordinator Shane Steichen's mantra of calling plays quickly has got the ground game back on track. Most of the yards came from Melvin Gordon, who had his first 100-yard game of the season (108 yards, 22 carries).

Rivers needs to get going quicker in games. Six of Rivers' 12 turnovers have come in the first quarter. He had two interceptions in the first 10 minutes against the Raiders, which led to 10 points and included a pick six.

"We have to figure out a way to do better because we can't keep turning over the football. That has been happening way too much this year," Lynn said.

Melvin Ingram has 3½ sacks in the past two games. The defensive end took advantage of Oakland trying to double-team Joey Bosa with two sacks of Derek Carr, marking the fifth game of his eight-year career with two or more sacks.

The offensive line, which struggled all night against four-man pressure by Oakland's defensive line. Rookie Trey Pipkins came in at left tackle after Russell Okung suffered a groin injury during the first half and was outmatched at times.

Both starting offensive tackles are dealing with injuries. Right tackle Sam Tevi (knee) was inactive and Okung had to depart for the second time in three games due to a groin injury. Lynn said Tevi had knee surgery Friday but is not done for the season. An MRI on Okung's groin showed no significant damage.

Safeties Derwin James (knee) and Adrian Phillips (arm) remain on injured reserve but are doing work on the side and will make the team trip to Colorado Springs to practice at altitude before the Mexico City tilt. It remains unlikely both would be ready to play against Kansas City.

3 — Receptions of 45 yards or more by Mike Williams in the past two games. The third-year receiver has emerged as Rivers' top target on deep passes in the same way that Tyrel Williams was last season.

The Chargers have the weekend off before heading to the Air Force Academy in Colorado Springs for a week to prepare for the Chiefs.