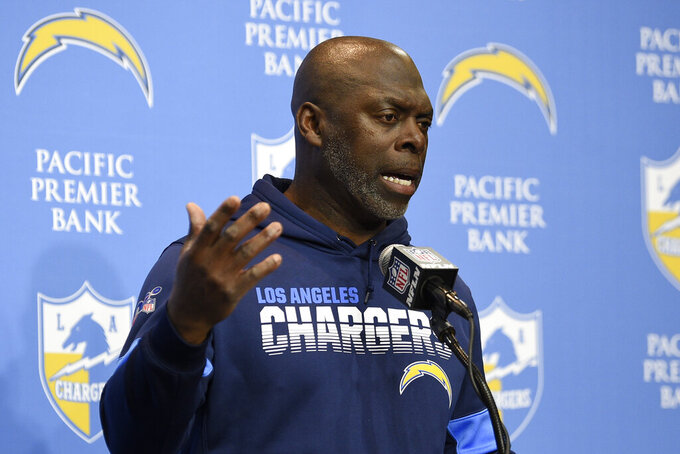 COSTA MESA, Calif. (AP) — A four-game winning streak at the end of the season wasn't enough to save Anthony Lynn's job with the Los Angeles Chargers.

Owner Dean Spanos on Monday fired Lynn after four seasons. Lynn led the franchise to the playoffs in 2018 but Los Angeles had losing records the last two seasons.

“I’m not sure there is another person in this league more respected as a human being than Anthony, and I want to sincerely express my deepest gratitude for his leadership,” Spanos said in a statement. “As we all know, this is a results-driven business and, simply put, the results of the past two years have fallen short of expectations.”

The Chargers were 3-9 after a 45-0 loss to the New England Patriots on Dec. 6, the worst loss in franchise history. They bounced back strongly by going unbeaten the rest of the way, including a 38-21 victory over Kansas City on Sunday, though the Chiefs sat out many key players.

Lynn tried to deflect talk about his future after Sunday's game, but gave some indications that he expected he wouldn't be back.

“You know what, if I got what I deserved, it would be really bad. I think we have done a good job here, under the circumstances," he said.

Quarterback Justin Herbert, a strong contender for NFL Offensive Rookie of the Year, said he found out in a text message from teammates that Lynn was dismissed. Other players said they found out via social media.

Herbert set a rookie record with 31 touchdown passes in 15 starts and said he learned a lot from Lynn.

“He allowed me to step up and be a leader,” Herbert said. “He taught me a lot of things about how to manage the huddle, how to step in there and take command."

Hired by the Chargers in January 2017, Lynn was the first Black head coach in franchise history and had one year remaining on his contract. He had a 33-31 regular-season mark.

Los Angeles started 0-4 during Lynn’s first season in 2017, but finished 9-7 after winning six of the last seven games. That served as a springboard to 2018 as the Chargers went 12-4, which tied for the best record in the AFC. They defeated Baltimore in the wild-card round before losing to New England in the divisional playoffs.

Trying to repeat that success was elusive. They were 7-16 since the start of last season in one-possession games. This season they had double-digit leads in six games and lost four. Lynn's clock management skills were questioned along with the team's struggles on special teams.

“We had some tough times but he was able to still get us to still fight together and still play hard for him. That’s the type of leadership he had on us,” veteran cornerback Chris Harris Jr., said. “We had high expectations and we didn’t reach those.”

Los Angeles has one of the more attractive openings of the six around the league. The franchise moved into SoFi Stadium this season, and also has a talented nucleus with Herbert, running back Austin Ekeler, wide receivers Keenan Allen and Mike Williams, defensive end Joey Bosa and safety Derwin James.

But it is also a team that has a history of being ravaged by injuries. James missed this season due to a knee injury and has played in only five games after he was an All-Pro selection as a rookie in 2018.

According to the website Man Games Lost, which provides injury analytics to most NFL teams, the Chargers were the fourth-highest impacted team in terms of players lost to injuries.

General manager Tom Telesco has one year remaining on his contract and will be hiring his third head coach. He is 60-68 during his tenure with only two playoff appearances in eight seasons.

“What you saw in these last four weeks is what you will have a chance to see moving forward. We had a young quarterback that stepped in and played in a situation that was unusual," Lynn said after Sunday's game. "I wish we could have won some of those close games we were in earlier, but we fell short. These men kept battling. They regrouped. We fought to finish this season off the right way. I think the fans have a lot to look forward to.”