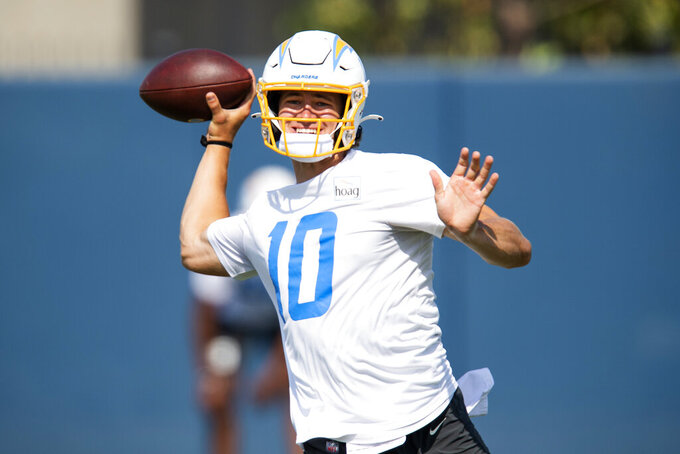 LOS ANGELES (AP) — Justin Herbert and the Los Angeles Chargers began their six-week vacation following Wednesday's final minicamp practice but the quarterback still plans to do a lot of studying leading up to the start of training camp next month.

Herbert likes the progress he has made learning the new offense being installed by first-year coach Brandon Staley and coordinator Joe Lombardi but he also realizes there are more expectations after a spectacular rookie campaign.

“The plan was kind of put everything in the first couple of days and it seemed like a lot,” Herbert said. “There's that mentality of everything’s put on you, you get to battle through and you’re going to make mistakes, but you’re going to learn from it. I really appreciate that because now, these past couple of weeks, we’ve got a great feel for it. Everything’s in and now it’s just kind of situations that we’re learning.”

Herbert got some added assistance Wednesday from a special visitor — former Chargers and Saints QB Drew Brees. Brees, who is getting an introduction on how to prepare for a broadcast as an analyst, spent time in the quarterback room with Herbert before observing practice.

While Lombardi's system will be tailored to Herbert's strengths, Brees said the best thing is it allows for flexibility.

“It’s like looking at the greatest restaurant menu that you’ve ever seen, but at the end of the day, you may not like this, you may not like that, but find the things that you’re really good at and hone in on those things. And let’s make that our bread and butter,” Brees said.

Tight end Jared Cook, who spent two seasons with the Saints before signing with the Chargers during the offseason, said that 30% to 40% of this offense carries over from New Orleans, but that there are enough nuances and new things added that it isn't an exact duplicate.

The excitement surrounding Herbert and the new offense also means there are high expectations. Herbert exceeded those last season when he set rookie passing records for touchdowns (31) and had the second-most passing yards at 4,336 en route to winning AP Offensive Rookie of the Year.

After Wednesday's practice, Staley said he noticed Herbert is more comfortable with the offense.

“I think he’s in a good spot. What was good is that he had to work to get there. It wasn’t easy for him right off the bat,” Staley said. “We didn’t want to take it easy on him. We wanted to make it right for him.”

Even though Herbert will try to rest before training camp, he said he has a couple of hours set aside each day to watch film and figure out adjustments that need to be made on certain plays so he can hit the ground running when camp starts on July 27.

Staley said the past couple months helped give his staff a good foundation to build on heading into training camp.

“Anytime you’re joining up with new people, there’s a process to earn their trust. And that took some time,” he said. “I feel like we got off to a good start. And then we were able to finish this the right way at minicamp.”

NOTES: Staley said he has had discussions with players about getting vaccinated. The NFL said Wednesday that nonvaccinated players will still need to be tested daily when they report to training camp. ... Herbert, who majored in biology at Oregon, said he has been vaccinated and added “there’s a small group of guys that have been vaccinated. ... I thought if it’s available to be able to do all these things, it would help me in the long run.”