Chiefs begin pursuit of another Super Bowl vs Steelers 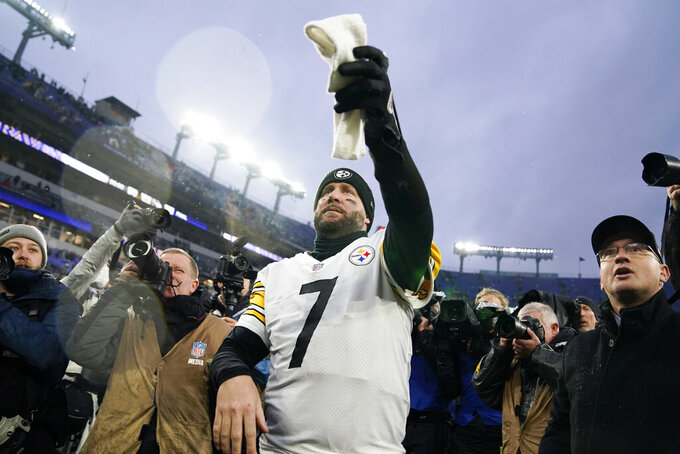 Pittsburgh Steelers quarterback Ben Roethlisberger hands a spectator a towel as he walks off the field after an NFL football game against the Baltimore Ravens, Sunday, Jan. 9, 2022, in Baltimore. The Steelers won 16-13. (AP Photo/Evan Vucci)

BETTING LINE: Chiefs by 12 1/2, according to FanDuel SportsBook.

STEELERS PLAYER TO WATCH: LB T.J. Watt. The league’s best edge rusher tied Hall of Famer Michael Strahan’s season sack record with 22 1/2 sacks, doing it despite missing two games entirely and parts of two others because of injuries. He was beaten up and a non-factor in the loss to the Chiefs last month, recording one tackle while being limited to 55% of snaps.

CHIEFS PLAYER TO WATCH: Whichever running backs are available. Clyde Edwards-Helaire will miss the game with a shoulder injury, and Darrel Williams should play despite a sore toe. Whomever gets the bulk of the carries will be going against the league's worst run defense, allowing more than 146 yards per game.

KEY MATCHUP: Chiefs QB Patrick Mahomes against the Pittsburgh pass defense, which has been solid against just about everyone but him. The Steelers ranked ninth in the league, allowing just 215.1 yards per game through the air, but Mahomes dominated them for 258 yards and three TDs when Kansas City routed the Steelers in December.

SERIES NOTES: The Steelers have dominated the series, though Kansas City has won the past two meetings, including their game in December. The Steelers beat the Chiefs 18-16 in the divisional round in 2017 while Kansas City beat the Steelers 27-24 in overtime in the wild-card round in 1994.

STATS AND STUFF: The Steelers have lost three straight playoff games since a win at Kansas City in the divisional round in 2017. QB Ben Roethlisberger, DL Cam Heyward and K Chris Boswell are the only players that remain from the team that lost to New England the following week in the AFC championship. ... The Chiefs begin the playoffs trying to make their third straight Super Bowl and fourth consecutive AFC title game. ... Roethlisberger will be making his 23rd postseason start, tied with Joe Montana for fourth among QBs in NFL history. ... Roethlisberger is 13-9 in the playoffs, though his QB rating in the postseason (86.4) is lower than the regular season (93.5). ... Roethlisberger is 7-3 against the Chiefs, with 18 TD passes and six interceptions. ... Pittsburgh RB Najee Harris set a franchise rookie record with 1,200 yards rushing. He had just 28 yards on 11 carries last week against Baltimore after injuring his left elbow in the first quarter. ... Pittsburgh’s defense finished last against the run for the first time since the NFL-AFL merger. The Chiefs ran for 127 yards in the first meeting. ... The Steelers finished atop the NFL in sacks for a fifth straight season (55). ... The Steelers’ minus-55 point differential is second worst in franchise history for a team that made the playoffs. They had a minus-61 differential in 1989 as a wild card at 9-7. That team won on the road at Houston in the first round before falling at Denver. ... Pittsburgh led the NFL with 169 fourth-quarter points, a franchise record. ... This is Pittsburgh’s 63rd playoff game, second in the NFL behind Dallas (64). The Steelers are 36-26 in the playoffs, including 6-6 in the wild-card or opening round. That includes an OT loss to Montana and the Chiefs in 1994. ... Kansas City won nine of its past 10 regular-season games after a 1-3 start. ... The Chiefs are trying to win their fifth straight home playoff game, extending the franchise record. ... Kansas City has allowed 10 points or fewer in its past five home games. Six games would tie the second-longest mark in NFL since 1950. ... Chiefs coach Andy Reid can pass Hall of Famer Joe Gibbs for fourth in postseason wins with his 18th. ... Chiefs QB Patrick Mahomes is 2-0 against Pittsburgh with nine TD passes and no interceptions. ... Chiefs TE Travis Kelce needs 17 catches to reach 100 in postseason games. He also needs 8 yards to reach 1,000 and one more TD for his 10th. ... Chiefs DE Frank Clark has 11 postseason sacks. He needs one to tie Reggie White for fourth most since sacks became an official stat in 1982. ... Chiefs RB Darrel Williams had a career-best 1,010 yards from scrimmage this season. ... WR Tyreek Hill was third in the NFL with a Chiefs-record 111 catches. He had 1,239 yards receiving and nine TDs. ... Chiefs FS Tyrann Mathieu had at least three interceptions for the third straight season.