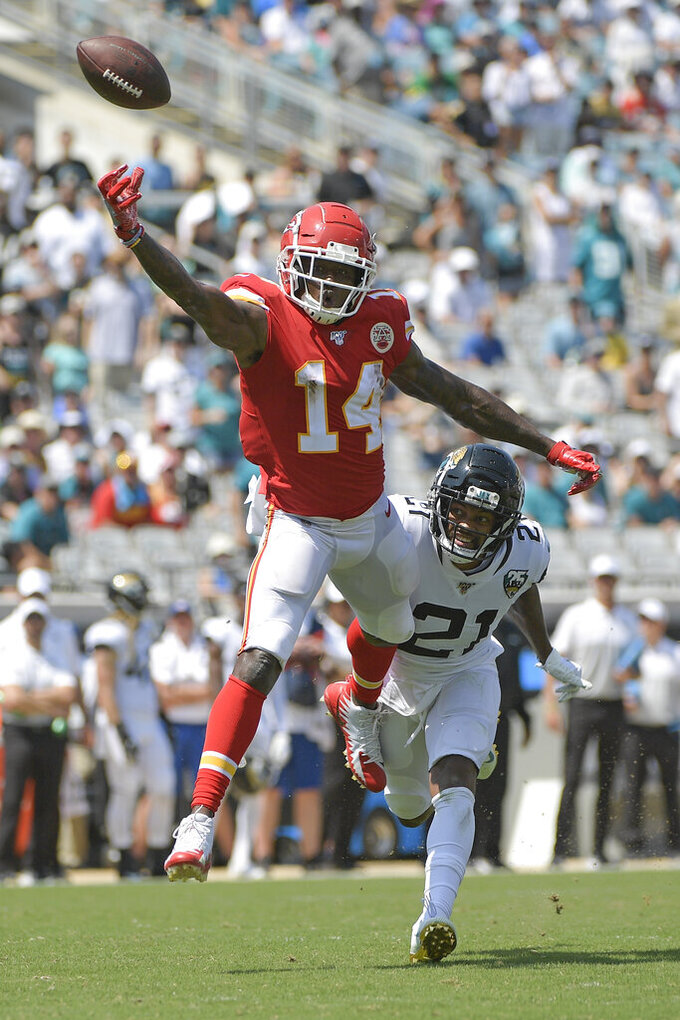 The Raiders were counting on technician Antonio Brown to get open on intermediate and deep balls to provide a needed spark in Oakland.

When these two AFC West rivals meet Sunday in the second game of the season in Oakland, they both will need to figure out how to thrive without their most dangerous receiving options.

"I'm big on next guy up," Chiefs coach Andy Reid said. "We've done that over the years and so I expect the next guys to step up and play. Nobody is alike, but most of the guys at this level have strengths, and so you play to their strengths and then you keep coaching them and teaching them to make their things that maybe they're not as strong better. But when you are putting your game plan together, you play to your strengths."

Hill was sidelined by a broken collarbone in a season-opening 40-26 win at Jacksonville. Sammy Watkins stepped up to fill that void last week with nine catches for 198 yards and three touchdowns.

The Raiders did just fine in last week's 24-16 win over Denver two days after releasing Brown following weeks of turmoil and missed practices.

Tyrell Williams had six catches for 105 yards and a touchdown, showing he has the skills to be the No. 1 receiver the Raiders thought he could be when they made him their top target in free agency even before making the trade for Brown.

"It's definitely an opportunity I've been excited for," Williams said. "My second year in the league when Keenan Allen had gotten hurt, I kind of was the No. 1 receiver that year (for the Chargers). I kind of just went unnoticed I guess. Just getting this opportunity and being able to showcase this is exciting."

Tight end Darren Waller, whose career has been hampered by substance abuse issues, had seven catches for 70 yards and proved to be a matchup nightmare for Denver's defense.

One of the big questions surrounding running back Josh Jacobs after the Raiders drafted him 24th overall was how he'd handle the load of a featured back in the NFL after being a part-time player at Alabama. Jacobs had more than 15 carries in a game just twice in college but raced past that mark in his NFL debut when he ran 23 times for 85 yards and two TDs and caught a 28-yard pass. He became the first player since LaDainian Tomlinson in 2001 to gain at least 100 yards from scrimmage and score two rushing touchdowns in his debut.

"It was just something to show durability," he said. "That I can take 20 carries a game and still come out and be full."

Since Reid took over as coach in Kansas City in 2013, the Chiefs lead the NFL with 26 defensive touchdowns. No opponent has been victimized more than the Raiders, who have given up four of those scores, including two thrown by Derek Carr in 2015 and last season. Carr has thrown nine career interceptions against the Chiefs, his most against any opponent.

The Raiders saw big improvement from second-year left tackle Kolton Miller in the opener. After allowing an NFL-worst 14 sacks as a rookie, according to Sports Info Solutions, Miller completely shut down Denver's Bradley Chubb last week. He gets another tough test this week against Frank Clark, who had 2 1/2 sacks against Oakland last year when he was with Seattle and faced Miller on a gimpy knee.

"He's just stronger, he's more experienced, he's healthy," coach Jon Gruden said. "Those are three things that have taken his game to another level and he's got to continue to prove it every week."

This game could be the final one played with infield dirt across the field. What once was a common sight in the era of multipurpose stadiums is now almost a relic as the Coliseum is the only remaining stadium used by NFL and baseball teams. The Raiders' next scheduled game in Oakland isn't until Nov. 3, after the end of the World Series, so the dirt will be gone for the final five home games of the season; they have a home game in London. The Raiders are set to move to Las Vegas next season, where dirt won't be an issue.