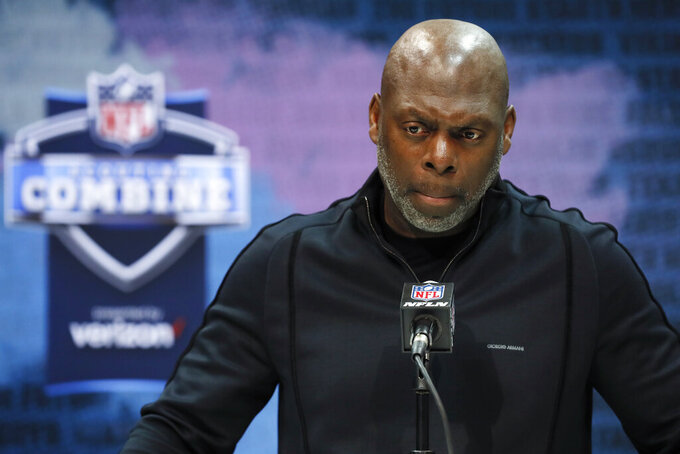 Anthony Lynn has expressed plenty of confidence in Tyrod Taylor if he ends up becoming the quarterback for the Los Angeles Chargers, but there are a lot of questions that still need to be answered between now and the start of the season.

The Chargers coach said during a conference call Wednesday that Taylor has the inside track but the team is still assessing all options.

“Right now he’s in the driver’s seat but nothing is finalized,” Lynn said. “When we brought him in last year we knew he could start if we needed him.”

Los Angeles announced in February that it would not re-sign Philip Rivers after a disappointing 5-11 season. Rivers signed with Indianapolis after starting the Chargers' last 235 games, including the playoffs.

Lynn and Taylor were together in Buffalo for two seasons. Lynn moved into the offensive coordinator spot after two games in 2016 and saw Taylor complete 61.5% of his passes for 2.615 yards with 14 touchdowns and five interceptions.

Taylor, who will be going into his 10th NFL season, cited Lynn as one of the reasons he signed with the Chargers last season.

Los Angeles — which is moving into SoFi Stadium later this year — could draft a quarterback with the sixth overall pick or make another move in free agency. Lynn said “they are looking at everybody” after he was asked if Cam Newton remained a possibility. Taylor recently posted a picture on social media of him working out with the former Carolina Panthers quarterback.

“Cam’s a good quarterback and done a lot of good things. He’s had some injuries. If he’s healthy he’s going to be a good QB for somebody,” Lynn said.

Even though the Chargers made some upgrades on the offensive line after signing tackle Bryan Bulaga and trading for guard Trai Turner, the team still has to determine who will start at left tackle. Russell Okung was sent to Carolina for Turner.

Lynn has said Scott could possibly be moved to guard while the Chargers bring up either Bulaga or Sam Tevi as left tackle possibilities and Pipkins remains more of a development project. Bulaga has not started at left tackle since he was in college at Iowa.

Lynn did say there might be some interest in Jason Peters, who remains unsigned after spending the last 11 seasons with the Philadelphia Eagles.

“We could add another veteran but it depends who he is. I like some of the guys that we have who played there last year," Lynn said.

Harris' signing was a surprise for many since the Chargers were not mentioned as a possibility leading into free agency. Lynn noted a team can never have enough cornerbacks, especially after injuries thinned LA's secondary last season.

“I like how free agency has gone. We picked up some quality talent and may still get more help during the draft,” he said.

Lynn and the Chargers are holding personnel meetings this week, albeit virtually. He said the draft will be different, but everyone is in the same situation.

“As long as no one’s internet goes out it should be good,” he said.