Commanders back on track, but Rodgers, Packers are up next 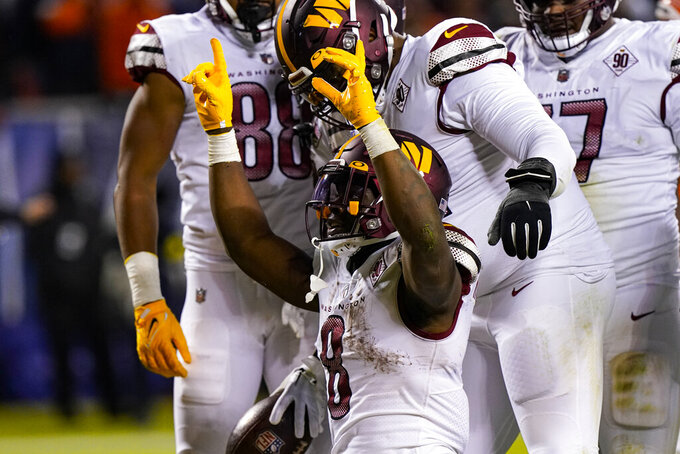 Washington Commanders running back Brian Robinson Jr. celebrates after a touchdown against the Chicago Bears in the second half of an NFL football game in Chicago, Thursday, Oct. 13, 2022. (AP Photo/Nam Y. Huh)

Beating the Chicago Bears 12-7 on Thursday night was far from a work of art for the Washington Commanders, and coach Ron Rivera could see almost as many negatives as positives when re-watching the game.

There were missed throws, missed catches and missed tackles: plenty to fix. But after halting the losing streak at four and getting back on track at 2-4, his team can look at stout red zone defense and a solid running game as building blocks with Aaron Rodgers and the Green Bay Packers coming to town next weekend.

“We ran the ball effectively at moments,” Rivera said Friday. “To the defensive players’ credit, the way they bowed their neck — an interception and then two fourth-down stops in the red zone — were huge, and those were obviously the difference in the game.”

Stopping the Bears on all three of their trips to the red zone brought Washington to a 50% success rate in that department this season, among the top 10 teams in the NFL. Giving up big-yardage plays continues to be an issue, notably Chicago’s Justin Fields scrambling for 39 yards.

Rodgers is very unlikely to do that when the Packers visit the Commanders on Oct. 23, but there are parts of the red zone defense that could translate to containing one of the game’s best quarterbacks. Forcing obvious throwing situations would be a start.

“We have to be stout up through the middle again and really kind of put them into a position where you do know he’s going to throw the ball,” Rivera said. “When there’s a little bit of doubt because he’s so good with his play action, you struggle with him.”

Washington has also struggled on the flip side of that offensively, with Carson Wentz getting sacked a league-most 23 times because pass-rushers have not needed to respect the run.

That changed against the Bears. The emergence of rookie Brian Robinson Jr. mixing and matching with Antonio Gibson and third-down back J.D. McKissic added up to more than 100 yards rushing and a much more balanced offense.

The Commanders forced two turnovers against Chicago, one more than their previous five games combined. One came on special teams with a muffed punt and the other was defensive tackle Jonathan Allen’s first career interception.

“Not a lot of thinking,” Allen said. “Just react and just looking up, and it just fell right into my lap.”

Washington’s defense twice had 12 players on the field and once was caught short with 10. Rivera called those mistakes unacceptable, particularly because part of the game plan was to prepare for Chicago’s quick substitutions.

If anything, it might be a teaching moment because the Packers like to do the same thing.

“(It is) a thing that Aaron Rodgers does so well,” Rivera said. “We’re going to face that this week coming up, so that’ll be a point of emphasis. We cannot get caught substituting.”

Gibson the kick returner could soon be a thing. He ran back one kickoff for 27 yards and may soon replace Dax Milne on punt returns now that Robinson is the lead rusher on offense.

Cornerback William Jackson was scratched with a back injury, but it’s also possible he has played his last game for Washington. Rivera and the coaching staff benched Jackson the previous game for performance reasons, and a change of scenery could benefit the veteran in the middle of a $40.5 million, three-year contract.

Wentz injured his right, throwing hand against the Bears and said he’d get an X-ray just to be sure. The 29-year-old expects to be OK and has extra time to heal up, but it’s not clear how serious the injury might be.

Rivera also is uncertain about the status of pass-rusher Chase Young, who is working to return from surgery to repair a torn ACL in his right knee. Young, who remains on the physically unable to perform list and is approaching 11 months since the injury, still has to meet with Dr. James Andrews before being cleared to practice and play.

“I don’t know if this week is a doable yet,” Rivera said. “But if it is a doable, what we’ll do is we’ll start his (practice) clock and get him out on the field.”

19 -- Sacks Washington has registered through six games, already half the team’s total from last season.

Game-planning for Rodgers and the Packers, which will be a much bigger challenge than the Bears. FanDuel Sportsbook set Green Bay as an early 6½-point road favorite.