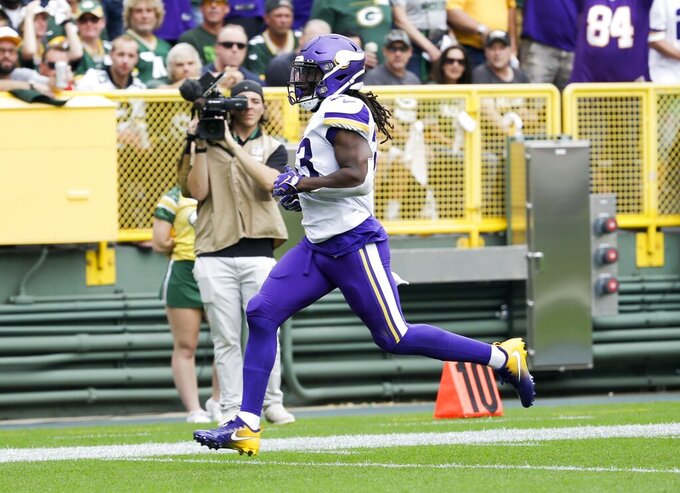 Minnesota Vikings' Dalvin Cook runs for a touchdown during the first half of an NFL football game against the Green Bay Packers Sunday, Sept. 15, 2019, in Green Bay, Wis. (AP Photo/Mike Roemer)

Cook ran for a career-high 154 yards and a long a touchdown to help the Vikings make it close after they looked as though they were going to get blown out in a 21-16 loss Sunday.

"It was just keep fighting," he said. "That's a tough team we've got. We've got some fighters. Smart, physical players and that's the type of locker room we've got. We just wanted to keep fighting, and I think as long as the scoreboard says some time on it, we think we've got a chance to win the football game."

It looked as if they had no chance, trailing 21-0 thanks to two touchdown throws by Rodgers in the first quarter and a 2-yard run by Aaron Jones two plays into the second after Kirk Cousins lost a fumble on a sack in Vikings territory.

But Minnesota stuck with the ground game despite the big deficit. And Cook helped make things at least interesting after combining to run for just 67 yards in two games against Green Bay last year.

On the second play from scrimmage after Jones scored, he broke off a 75-yard touchdown that was the longest run of his career. It was also the second-longest ever by a Minnesota player against the Packers.

Cook burst through a hole in the middle and avoided a lunging Darnell Savage near midfield as he turned toward the right side on the way to the end zone.

"The O-line gave me a crease on the backside," he said. "I just hit it with all I had. It was just one of those plays, I was close to being hit a couple of times today. That was the time that I had to take full advantage of it right there."

The Vikings are banking on big things from Cook in his third season after injuries limited him to 15 games through his first two. His emergence would give them a better run-pass balance and provide a big lift coming off a disappointing year.

The Vikings thought they had a Super Bowl contender in 2018 after signing Cousins, only to miss the playoffs at 8-7-1.

It was no surprise they made some changes in the offseason, with Kevin Stefanski taking over as offensive coordinator and bringing in former Denver Broncos coach Gary Kubiak as an offensive adviser. They also made some adjustments on the line.

The Vikings are trying to make Cook a key weapon to go with one of the best receiving tandems in Adam Thielen and Stefon Diggs.

Cook carried 20 times against Green Bay after running for 111 yards in a season-opening win over Atlanta. That gave him back-to-back games with 100 or more for the first time in his career and four in all.

"Having a back like that definitely makes it easier up front," guard Dakota Dozier said. "If you can get your guy for just a split second, he can get through the hole, make some big plays. I definitely love blocking for him."

The Vikings stuck with the run on a day when Cousins was off target — 14 of 32 with 230 yards, a touchdown and two interceptions.

They also committed eight penalties for 100 yards, including an offensive interference call on Cook late in the half that wiped out a 3-yard touchdown pass to Diggs. Minnesota settled for a field goal.