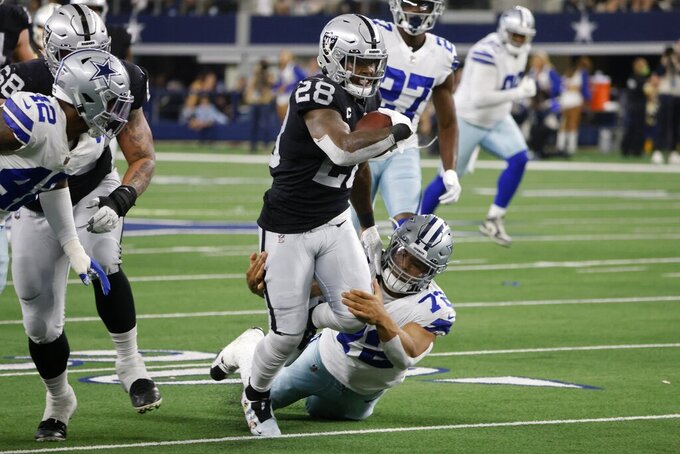 Las Vegas Raiders running back Josh Jacobs (28) picks up a first down running the ball as Dallas Cowboys defensive tackle Trysten Hill (72) helps make the stop in the first half of an NFL football game in Arlington, Texas, Thursday, Nov. 25, 2021. (AP Photo/Michael Ainsworth)

NFL and players' union appeals officer Derrick Brooks heard Hill's appeal Tuesday and ruled in favor of the third-year player. Hill will miss Thursday's game at New Orleans but will be eligible to play at Washington on Dec. 12.

The league said the suspension was for violations of rules regarding unnecessary roughness and unsportsmanlike conduct, particularly for contact to a player's face, head or neck.

Hill had just played his best game of the season, leading Dallas defensive linemen with five tackles against the Raiders.

Dallas’ top pick as a second-rounder in 2019, Hill has played just 15 games in three seasons. He missed the last 11 games of 2020 and the first eight games this year after tearing a knee ligament.