Daniel Jones will not play against Dolphins, neck injury 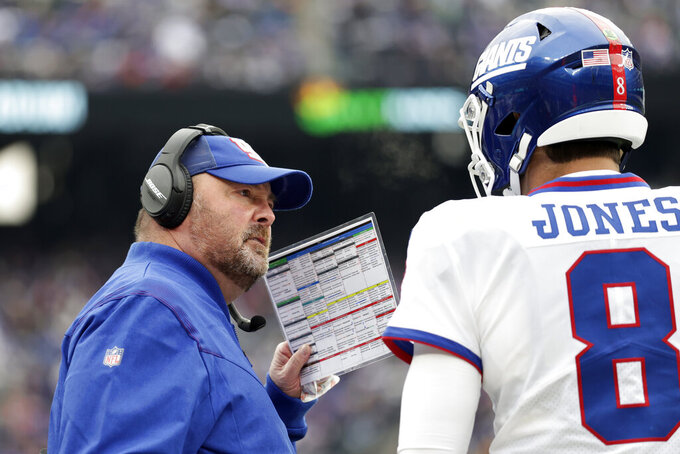 EAST RUTHERFORD, N.J. (AP) — New York Giants quarterback Daniel Jones will not play against the Miami Dolphins on Sunday because of a neck injury, and he could be out longer.

Coach Joe Judge ruled out Jones on Friday after being told by the team's medical personnel that the third-year quarterback had not been cleared for contact. Veteran Mike Glennon will get the start, his first with the Giants.

“I know this is frustrating for him, but I think it’s best for him,” Judge said of Jones.

The second-year coach would not discuss the specifics of Jones' injury, saying the decision to rule him out was solely for this week. Judge said it is uncertain at this point when Jones will be cleared to play.

The 24-year-old Jones did not talk to the media after practice.

Jones, who has been the Giants' starter since early in his rookie season of 2019, will be evaluated next week when the team trains in Tucson, Arizona for a game against the Chargers in Los Angeles on Dec. 12.

Glennon replaced a concussed Jones for a half against Dallas on Oct. 10 and completed 16 of 25 passes for 196 yards, a touchdown and two interceptions. Jake Fromm, who the Giants signed off the Buffalo Bills practice squad, will back up Glennon.

Jones, who has started every game this season, sustained what he said was a strained neck against the Philadelphia Eagles last Sunday. The sixth draft pick overall in ’19 practiced on a limited basis on Wednesday and Thursday.

Glennon felt there was a good chance all week he would start, noting he got extra snaps in practices. He also spoke with the receivers and new offensive play caller Freddie Kitchens about what plays he feels comfortable running.

“I haven't had a whole lot of opportunity to start in the NFL so any time you get one of those opportunities, there will be a little nerves. But there is an excitement to get out there and play again,” said the 31-year-old Glennon, who is in his ninth season.

Glennon started five games late last season for the Jacksonville Jaguars. He was 111 of 179 for 1,072 yards, seven touchdowns and five interceptions. He has not won a game as a starter since 2017 with the Bears.

“He’s played well when he’s gone in,” Judge said. “Look, we expect Mike to go to run the offense.”

Fromm has never been active for an NFL regular-season game. He said the Giants' offensive system is a little different than the Bills' schemes, but he is learning it as quickly as he can. The Georgia product added the Giants warned him he might be active this weekend.

“You think about what can happen, but honestly, the focus for me the last few days is learning as much as I can about this offensive system, how we do things here. It's an awesome opportunity,” Fromm said.

The Giants' offense has struggled this season, and coordinator Jason Garrett was fired last week. Judge turned to Kitchens to call the plays.

Without Jones, it is going to put more pressure on the defense, which has played well recently.