DK Metcalf impresses Seahawks teammates, but not himself 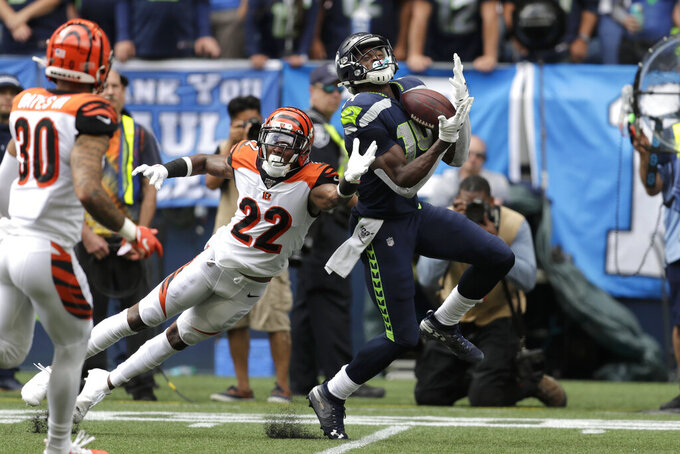 RENTON, Wash. (AP) — DK Metcalf seemed to do everything right in his first Seattle Seahawks game.

He wore a vintage Steve Largent jersey to the stadium. He caught a pair of deep passes where his combination of size and speed were on display. He even added a little flash to the typical football attire with a mouthpiece designed like a baby pacifier.

Metcalf may have been about the only one who wasn't impressed.

"I could have done a lot of stuff better but overall it was just fun and just a good experience to be out there for the first time," Metcalf said.

Despite his modesty, the Seahawks' second-round pick certainly justified the hype that has surrounded him. He finished with four catches for 89 yards, setting a Seattle rookie record for yards receiving in his debut. He was also Seattle's most-targeted receiver, a sign of the confidence quarterback Russell Wilson has in him.

"I've been working with him since the day he got drafted for the most part," Wilson said. "His work ethic is unbelievable. He works extremely hard. We worked all offseason together. He's got knowledge of the game. I think the thing that jumps out about DK more than anything else is his mind. He understands the game really well. He sees things and reacts."

One play in particular during the Seahawks' win over Cincinnati on Sunday provided a perfect example of how quickly the connection between the quarterback and receiver has developed.

Wilson was pressured and scrambled free of the rush. He was about to cross the line of scrimmage when he saw Metcalf downfield and gave the big receiver a chance to make the play. Metcalf shielded a defender and used his height to pull in a 25-yard pass.

"Most rookies don't recognize things as fast, in their first couple of games at least, as fast as DK did in that first game. I think he saw things when I was scrambling and reacted quickly," Wilson said.

"I'm starting to know that they are calling OPI a lot more so just got to change my game to the rules," Metcalf said. "I know I've got a lot of strength that most receivers don't have so just got to adapt and change with the game."