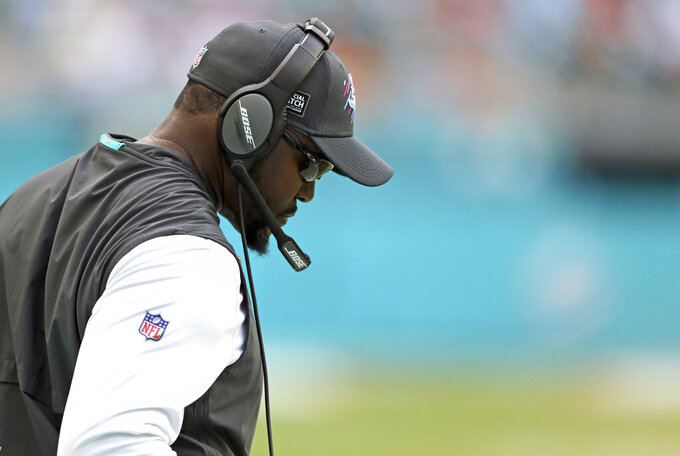 Miami Dolphins Brian Flores looks on during the fourth quarter of an NFL football game against the Atlanta Falcons, Sunday, Oct. 24, 2021, in Miami Gardens, Fla. (David Santiago/Miami Herald via AP)

ORCHARD PARK, N.Y. (AP) — As if Dolphins quarterback Tua Tagovailoa doesn’t have enough worries overseeing a team in freefall and facing questions about his suddenly unsettled future given the swarm of speculation regarding Miami’s interest in acquiring Deshaun Watson.

Up next for the second-year player is a trip to Buffalo to face the division rival Bills, who sidelined him for three weeks due to injured ribs two series into their most recent meeting in Week 2.

“This is a great opportunity,” said Tagovailoa, who received a vote of confidence from coach Brian Flores this week.

As to whether he’s additionally motivated after how his previous outing against Buffalo came to an abrupt end upon being brought down by A.J. Epenesa on an early failed fourth-and-2 attempt, Tagovailoa said: “Well, honestly, I just want to win. That’s really all that is.”

A win won't eliminate all the distractions, but it might help ease the burden — for one week at least — of how a once-promising season thoroughly unraveled in Miami.

After a season-opening 17-16 win at New England, very little has gone right for the Dolphins (1-6) in the midst of a six-game skid, their longest since losing seven straight to open the 2019 season.

The streak began with a 35-0 loss to Buffalo in Miami’s home opener, which marked the Bills’ most lopsided victory in 115 meetings between the two teams.

It was Buffalo’s sixth straight win over Miami during a stretch in which the Bills have outscored the Dolphins by a combined 232-112. The streak includes the Dolphins getting bumped out of playoff contention following a 2020 season-ending 56-26 loss in which Buffalo rested most of its starters after halftime.

“It’s an incredible challenge,” cornerback Byron Jones said, referencing the Bills' wealth of talent. “We like those challenges. That’s fun for us.”

Fun wasn’t the operative word for the AFC East-leading Bills (4-2) this week. Buffalo spent its bye break attempting to digest a 34-31 loss at Tennessee. The outcome was decided in the final seconds when quarterback Josh Allen slipped while failing to convert a fourth-and-inches at the Titans 3.

“This was definitely another gut shot,” said receiver Stefon Diggs, who's team entered its bye last year following a last-second 32-30 loss at Arizona in Week 10. Buffalo responded by winning eight straight before losing to Kansas City in the AFC championship game.

“We go back to work with the mindset of we need to get better,” he added. “No real panic. We know our opponent. We respect our opponent. But we’re working each and every day to try to win.”

Tagovailoa returned from injury to put up some stellar numbers, going 65 of 87 for 520 yards and six touchdowns with three interceptions while being sacked just once.

“I think he’s making quicker decisions. I think he’s doing a lot of things,” Flores said. “Look, it’s a small sample size, but every time he steps out there, I see progress.”

The Bills have held back their blitz twice this season in losses to Pittsburgh and Tennessee out of respect for both teams’ running attacks. Otherwise, Buffalo has 12 sacks in its four wins, including six against Miami.

Three Dolphins losses, including the past two, have been decided by opponents hitting field goals as time expired.

“It’s been disappointing, but as far as the psyche of the team, I've said this all year that this is a resilient group,” Flores said. “This isn’t an effort issue. This isn’t a desire issue. This is just a situation right now where we’re just not doing enough to pull these games out.”

Bills offensive coordinator Brian Daboll spent the bye week mourning his grandfather, Christian Kirsten, some three weeks after his grandmother, Ruth Kirsten, died. Though born in nearby Welland, Ontario, Daboll was raised by his grandparents in suburban Buffalo.

“I think everybody goes through struggles and adversity,” Daboll said. “You’ve got to stay focused, you’ve got to stay committed to the cause. The two people that I lost would want it to be that way.”

Allen spent part of the bye week unveiling the Patricia Allen Pediatric Recovery Wing at Buffalo’s Oishei Children’s Hospital. The wing is named after the quarterback's grandmother, who died a year ago, and led to Bills fans donating $1.1 million to the hospital in her honor.

“I still can’t really finds the words for it. It was great,” Allen said.