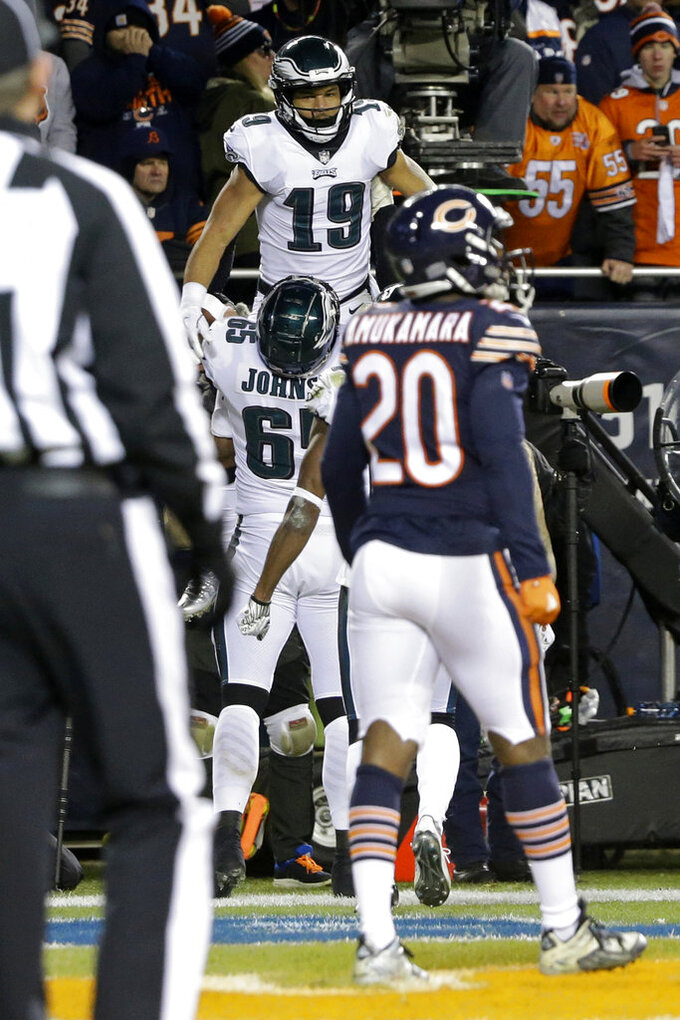 CHICAGO (AP) — Nick Foles hit Golden Tate with a 2-yard touchdown pass on fourth down with 56 seconds remaining against the NFL's stingiest defense, lifting the Philadelphia Eagles past the Chicago Bears 16-15 on Sunday in the final wild-card game.

Former Eagles kicker Cody Parkey hit the left upright and then the crossbar with a field-goal attempt from 43 yards with 10 seconds remaining, silencing the raucous crowd.

The defending league champion Eagles (10-7) squeezed into the playoffs by beating Washington and having the Bears (12-5) help them by knocking off Minnesota in the season finale. Philadelphia thanked its benefactor with a 12-play, 60-yard drive on which Foles, the Super Bowl MVP last February, hit six passes.

No team has repeated as Super Bowl champion since New England in 2004, and the Eagles are a sixth seed. The last sixth seed to win the NFL title was Green Bay in the 2010 season.

But these Eagles, led by Foles and a defense down to backups at several positions, seem to have that magical touch like last season.

It was a sizzling ending to a game marked by superior defense and several critical mistakes by the Eagles. They had to survive after Tarik Cohen, an All-Pro punt returner, took back the kickoff following Philly's go-ahead score 35 yards. Mitchell Trubisky completed two passes to get the Bears close enough for Parkey. But his kick took a double deflection and fell harmlessly into the end zone.

He was 11 of 12 in the fourth-quarter on field goals before missing the biggest kick of his career.

BALTIMORE (AP) — Los Angeles kept Lamar Jackson grounded, and by the time the rookie got the passing game going it was too late for Baltimore.

Michael Badgley kicked five field goals, and Los Angeles harassed and hounded Jackson during a victory in the opening round of the NFL playoffs.

The Chargers (13-4) will next face the second-seeded New England Patriots (11-5) on the road Sunday. The Chargers last won two games during a single postseason in 2007, when the franchise was in San Diego.

The Chargers built a 23-3 lead in the fourth quarter before Jackson threw two touchdown passes to make it close. Given one final chance to complete the comeback, the 21-year-old Jackson looked every bit like the youngest quarterback to start an NFL playoff game when he lost the ball on his third fumble of the game.

Jackson finished 14 for 29 for 194 yards with an interception. He was sacked seven times.

By Teresa M. Walker 57 minutes ago
5 hrs ago
By Greg Beacham 6 hrs ago
6 hrs ago
By Brett Martel 7 hrs ago