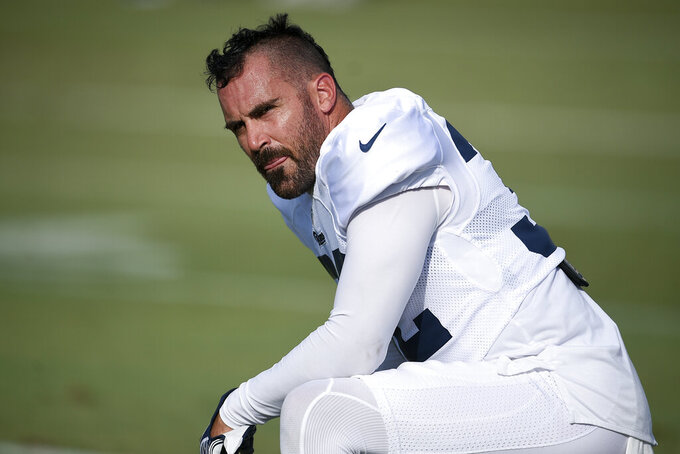 LOS ANGELES (AP) — The Los Angeles Rams must play without both of their starting safeties in their opening playoff game against the Arizona Cardinals on Monday night. Leading tackler Jordan Fuller is out for the season with a right ankle injury, and Taylor Rapp is in the NFL's concussion protocol.

That means Eric Weddle is quite likely to play meaningful snaps in a postseason game nearly two years after he retired to life as a suburban dad, chauffeuring his four children to school activities and coaching his son's football team.

It’s a remarkable turn of events for a two-time All-Pro safety who voluntarily left the NFL behind with a year on his contract and never thought he had retired too early. Weddle and the Rams both think he can make it work.

“It's crazy to say this, but it's as if I never left,” the 37-year-old Weddle said this week after he started practice for one of the most unlikely comebacks in recent NFL history. “When I'm out there going through plays and I'm seeing routes and moving, it's inside me. It's who you are. This is what I've done my whole life.”

Weddle hadn't even thought about returning to the Rams — the team with which he spent the last of his 13 NFL seasons in 2019 — until he got desperate phone calls from Sean McVay and defensive coordinator Raheem Morris last Sunday night after both Fuller and Rapp got hurt.

“I would regret it if I didn’t come and take this chance to help out the guys that I love, a coach that I love, in whatever role that is,” Weddle said. "How can I look (at) my team or my kids — or anyone, for that matter — if I didn’t follow through on what I preach?”

Wade Phillips was the Rams’ defensive coordinator for Weddle’s only season with the team, but Weddle has been friendly with Morris since he coached Weddle at the Senior Bowl. When Los Angeles realized its safety depth was in trouble, Morris hit up Weddle with a great opening line: “You’re not fat and out of shape, are you?”

“He said, ‘I’ll never be fat,'" Morris recalled with a smile. "I know he consistently works out, keeps himself in good shape. His brain is like no other. It’s like a coach.”

Although he spends much of his time in the San Diego suburbs running the “Weddle taxi service,” as he described it, Weddle also plays as much pickup basketball as possible, a pastime he kept throughout his decorated career as a two-time All-Pro safety for the Chargers, Ravens and Rams because the stop-and-start motions of hoops seem beneficial for defensive backs.

Weddle lost weight to take the strain off his knees, but that departed muscle mass didn't stop him from “training like a madman,” as he put it. Weddle has been an elite athlete for too long to abandon a lifetime of work habits — and he was ready when this opportunity arose, even if he didn't expect it.

And Weddle isn't coming in cold: He has watched every down of every Rams game this season. The six-time Pro Bowl safety spent every week texting his friends still with the team, particularly McVay and All-Pro defensive back Jalen Ramsey.

Although they only played half a season together after Ramsey’s arrival in a trade with Jacksonville in 2019, Weddle and Ramsey share a connection on the field that Ramsey describes as “a whole other language.”

“I didn’t want him to retire,” Ramsey said Friday. “He did anyway.”

When Ramsey got a series of urgent “Call me" texts from Weddle last Sunday, he didn't imagine what was happening until Weddle gave him the unlikely news.

While backup safeties Nick Scott and Terrell Burgess could play the majority of the snaps, Weddle will be on the field — and Ramsey is confident his veteran friend can make a difference to keep the Rams' Super Bowl dreams alive.

“It was something I personally felt like I needed and really, really wanted — another guy like that in our secondary, even if it’s just for the playoffs,” Ramsey said. “I’ve been blessed to play with some good safeties in my career. I feel like he’s probably the best I’ve played with in my career. ... We were always able to be on the same page. We think alike and have the same vision.”

NOTES: WR Van Jefferson is listed as questionable after being limited in practice this week with a shoulder injury. He is second on the LA roster with 802 yards receiving and six TDs. ... QB Matthew Stafford (toe) and CB Darious Williams (shoulder) were full practice participants all week.