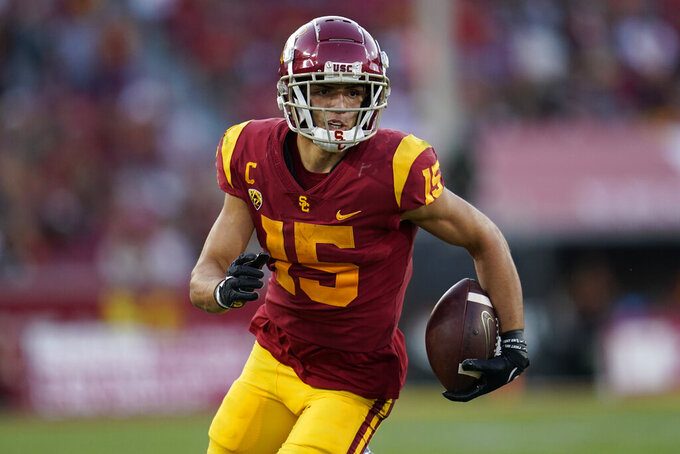 FILE - Southern California wide receiver Drake London runs for a touchdown against Utah during the first half of an NCAA college football game Oct. 9, 2021, in Los Angeles. London was selected by the Atlanta Falcons in the NFL draft Thursday, April 28, 2022. (AP Photo/Marcio Jose Sanchez, File)

FLOWERY BRANCH, Ga. (AP) — Maybe it won't be so easy for defenses to focus all their attention on Atlanta Falcons tight end Kyle Pitts after all.

The Falcons added help for Pitts in the NFL draft, and with that help came impressive size.

The Falcons continued to emphasize their passing game by selecting Southern California wide receiver Drake London with the No. 8 overall pick on Thursday night.

London gives Atlanta a much-needed top threat at wide receiver. The selection comes one year after the Falcons chose Pitts with the No. 4 overall pick.

London (6-foot-4, 219 pounds) provides excellent size as well as big-play potential. He had 88 catches for 1,083 yards and seven touchdowns for USC in only eight games in 2021 and was named the Pac-12 offensive player of the year.

It would be a major shock if London is not on the field with Pitts. He will be expected to make an immediate impact on an offense undergoing a dramatic overhaul following the trade of 14-year starting quarterback Matt Ryan to Indianapolis.

London said he is fully recovered from a fractured right ankle which ended his 2021 season. He pointed out that he is still working to restore his endurance but otherwise has no limitations.

London said he had many conversations with the Falcons before the draft and expressed confidence in the regime led by general manager Terry Fontenot and coach Arthur Smith.

“I just felt like I wanted to be in Atlanta at the end of the day,” London said, adding he likes “the coaching, the direction that they’re going in and just the type of players they want to bring in to their facility. They’re just moving in the right direction and I just can’t wait ... to be a Dirty Bird someday.”

London was the first wide receiver taken in the draft. The Falcons' pick triggered a run at the position. Ohio State's Garrett Wilson was the No. 10 overall pick by the New York Jets. Another Ohio State wide receiver, Chris Olave, was selected at No. 11 by New Orleans, followed by Alabama's Jameson Williams at No. 12 to Detroit.

The Falcons entered the draft with an obvious need at the position.

Russell Gage was left as the team’s top wide receiver last year when Calvin Ridley played only five games while away from the team addressing mental health issues. Gage signed with Tampa Bay. Ridley was suspended by the NFL for 2022 for betting on games last season.

The Falcons received a third-round pick from the Colts in the Ryan trade. Atlanta signed Marcus Mariota as the probable starter next season. Mariota has been reunited with Smith, who was the Tennessee offensive coordinator when Mariota lost the starting job with the Titans in 2019.

Feleipe Franks, who attempted only one pass in 2021, is the only other quarterback on the roster. Fontenot says the team will find help at the position through the draft, a trade or free agency.

Fontenot said this week the uncertainty of who would be selected with the first seven picks added “unique” intrigue to his preparations. Even so, Fontenot knew he'd have no chance to consider some players who would be attractive to the Falcons, including Michigan defensive end Aidan Hutchinson.

The Falcons will be busy on Friday night, when they have four picks — two in the second round and two in the third. They have nine selections overall, including two in the sixth round but none in the seventh on Saturday.

The Falcons, coming off a 7-10 season in which they were outscored 459-313. Fontenot said he hopes to add competition at every position. Another glaring need is the pass rush.

Atlanta ranked last in the NFL with 18 sacks last season, 11 fewer than any other team. They released outside linebacker Dante Fowler, who led the unit with 4 ½ sacks.

Atlanta has received good production from its most recent first-round picks.

Pitts led the Falcons with 68 catches for 1,026 yards as a rookie. Cornerback A.J. Terrell and right guard Chris Lindstrom, first-rounders in 2020 and 2019, respectively, rated among the top players at their positions last season.