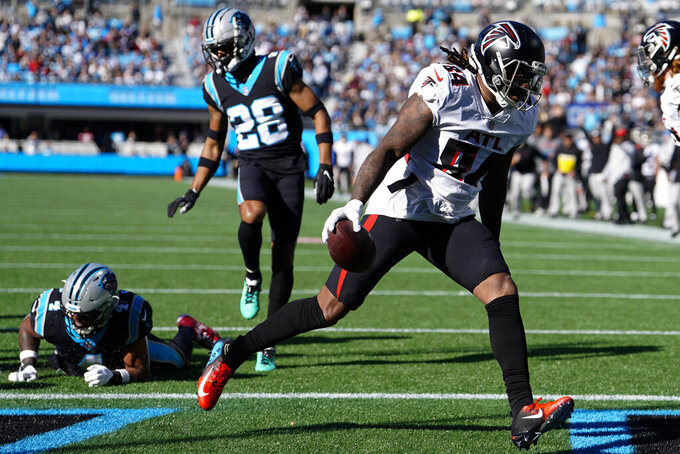 Atlanta Falcons running back Cordarrelle Patterson scores against the Carolina Panthers during the first half of an NFL football game Sunday, Dec. 12, 2021, in Charlotte, N.C. (AP Photo/Jacob Kupferman) 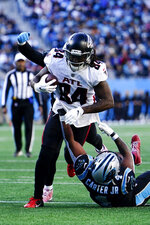 ATLANTA (AP) — First-year coach Arthur Smith has been adamant that the Atlanta Falcons can run the ball effectively no matter the opponent.

Turns out he was right.

The Falcons have rushed for 398 yards the last three weeks against Carolina, Tampa Bay and Jacksonville, each of which is ranked in the top half of the league in run defense. They are 2-1 over that span and are still in the NFC playoff hunt at 6-7.

“You’re starting to see some of that hard work pay off,” Smith said a day after Atlanta won 29-21 at Carolina. “You want to do things a certain way, but it’s a long, hard journey. Certainly at times you want things sooner rather than later, but that’s why we didn’t panic and give up on the run game. We know how we want to play and the style, and it’s a credit to those guys up front.

Cordarrelle Patterson got the rushing attack going with a 5-yard touchdown that tied it at 7 in the first quarter. From there, the Falcons had enough push to finish with 128 yards, 58 from Patterson and 44 from Mike Davis, who also caught five passes for 42 yards.

Smith, a former offensive coordinator at Tennessee, knew he wouldn’t have an easy time implementing a powerful running game without a star back like Derrick Henry. But the Falcons stayed with Smith’s plan to gut it out and focus on improving.

Smith acknowledges there were times he was frustrated. He’s pleased now that the run game is trending in the right direction.

“It was personal,” linebacker Mykal Walker said. “You let someone come in there and run all over you. You’ve got to fight back. The guys did a hell of a job up front. I’m proud of them for doing that.”

The Falcons have almost no downfield passing threat, particularly with No. 1 receiver Calvin Ridley out most of the season. The longest pass covered 36 yards to Russell Gage and the next longest was 23 to Kyle Pitts and 20 to Davis.

Walker had a 66-yard pick-6 in the second quarter two weeks after leading the Falcons in tackles at Jacksonville. The second-year linebacker also celebrated the birth last week of his first child, a son named Kayden. Walker rocked the football like a baby after scoring.

Walker was ecstatic to intercept Cam Newton, his favorite player growing up.

“I was bummed out last year he wasn’t here,” Walker said. “Finally got a chance to play against him. It was pretty cool. My first interception, baby born a couple of days ago, I’m on cloud nine.”

There’s still no word on Ridley, who’s tending to mental health issues and hasn’t played since Week 7 at Miami.

0 — QB Matt Ryan stayed mostly clean in the pocket with no sacks and seven hits.

Keep harping on the running game and get ready to visit San Francisco.