On Football: NFL opt outs more prevalent than many expected 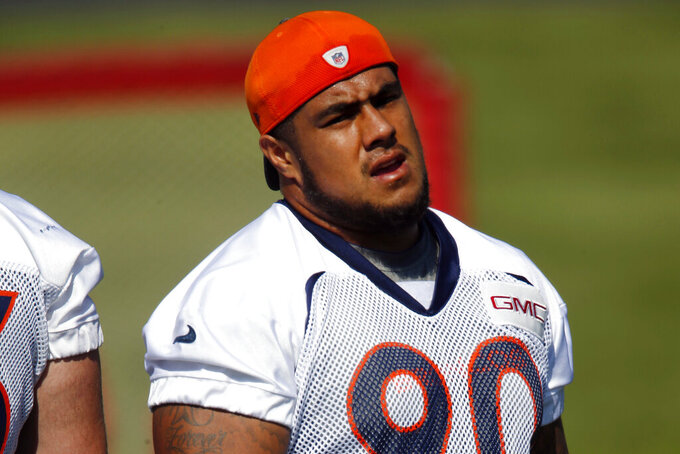 FILE - In this Aug. 16, 2016, file photo, Denver Broncos nose tackle Kyle Peko (90) takes part in drills during the team's NFL football training camp in Englewood, Colo. Peko is opting out of the season because of the coronavirus. (AP Photo/David Zalubowski, File)

Now we know why a key topic in talks between the NFL and the players' union focused on opt outs.

Already, some three dozen players have decided not to play the 2020 season. It's certainly not about the money, because those opting out voluntarily are getting a $150,000 stipend, and those walking away due to pre-existing medical conditions get $350,000. In the NFL, that's hardly a huge payout.

No, it's all about what it should be about: health and safety. For players and their families.

New England linebacker Dont'a Hightower, maybe the most accomplished player to opt out, described his feelings in a social media statement.

“I do feel that it’s the best decision for my family at this time,” Hightower said. “I’m so grateful for the support of my teammates and coaches as well, and I will try to continue to lead and help as much as I can.

"2020 has been a challenging year for our world. I hope you can all continue to be a light in these dark times — more light and great times are ahead.”

For now, in these troubled times, opting out has been more popular in the NFL than anywhere else. Both MLB and the NBA had about a dozen players opt out of returning, while the NHL had half that. The biggest names included Buster Posey and David Price in baseball, Avery Bradley in basketball, Travis Hamonic and Mike Green in hockey.

Opt outs in the NFL alone appear headed beyond those numbers combined, which privately has surprised some league executives. On Wednesday, Chiefs starting running back Damien Williams, a key to their Super Bowl run last season, said he wouldn't play.

In a sport built around contact, with rosters nearly equaling the size of the other three sports combined, and little to no thought of playing in a bubble, players deciding to skip the upcoming season seems plenty logical.

“We did know this was going to be a possibility,” players' union vice president Ben Watson told SiriusXM NFL Radio. "That is why the NFLPA fought so hard to give guys the option. We are in times people don’t have answers for. Everybody has different situations — maybe contractually, maybe who they live with, guys who live out of the area and have to travel back. There are a variety of different reasons why, and I think we are going to find out more about that as time goes on.

"I am always in support of the men having the agency to decide for themselves what is best for them and their families. And specifically, when it comes to health, they have to make those decisions. I think the great thing is we have these protections in place and the abilities for the guys to say, 'Look this is not for me and my family right now. I am going to sit this one out.′ And maybe (they) come back next year, and maybe not at all.”

Any player who opts out creates some decision making for team personnel departments. But even if it is a star, an irreplaceable starter, there should be no questioning the move.

“The opt-out option is a player’s choice and a player’s right, and we’ll respect that if a player decides to do that," Broncos President Joe Ellis says. "That’s absolutely, 100 percent their right, inherently. I’ve got no objection to that at all and would be supportive of that, if that’s what somebody wants to do. That’s been going on around the league, as you’ve seen. It’s going around and around other sports leagues, as well.

“I had some good conversations ... and they were very, very curious. I don’t want to say concerned, but they wanted to know what was going to happen and how it was going to be handled, things like that. It’s at the front of their minds.”

While players always rely on trainers and medical staff when it comes to injuries, the pandemic creates an entirely new set of issues. Recovery and rehab from, say, a knee injury, is a totally different, well, ballgame.

“(I) Wasn’t quite sure exactly what number would come in, but the biggest thing to consider is players taking care of both themselves, as well as their families, and each player has their own unique circumstance," says Browns team physician Dr. James Voos. "We feel that it is our job to help to guide them through it, serve as a trusted healthcare adviser and allow them to ultimately make that decision themselves.

"I don’t think it is an inordinately high number of players, but I’m proud of the way the players and the teams have worked through this together so that we can responsibly make those decisions so that everyone feels good and safe about participating in the season.”