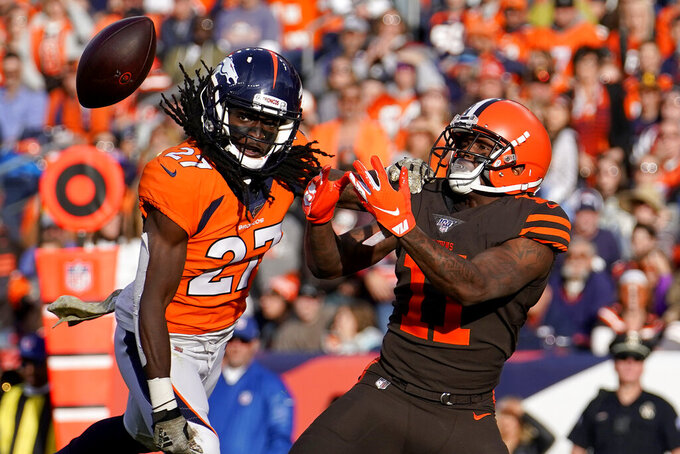 ENGLEWOOD, Colo. (AP) — The turning point for the Denver Broncos' scrambled secondary came on cutdown day last summer more than a thousand miles away in Cincinnati.

Davontae Harris' cellphone buzzed and the Bengals’ 2018 fifth-round draft pick from Illinois State wasn't really surprised Cincinnati was cutting him. The team had a new coaching staff and was set at cornerback and gunner.

"They wanted me to come back later that day to sign on for the practice squad," Harris said Thursday. "And I didn't go in. I didn't show up. I went and did my own thing because I felt like if they would have wanted me, then they would have kept me. I guess I bet on myself and just waited for an opportunity to come."

He said it’s not that he begrudged the Bengals for giving up on him after just one season, most of which was spent on IR with a knee injury.

He actually thanked them for cutting him.

"I think they made the best decision for them," Harris said. "But it was something that I needed. I think it was a wakeup call that I needed.”

"I just put my phone down and I meditated for most of the day," Harris said.

Pondering his past brought his future into focus. He emerged from his self-reflection with a determination to make sure he was never on the roster bubble again.

"I basically told myself I don't know where I'm going to end up, but wherever I go it's going to end better than this," Harris said. "So, that was my goal, to go somewhere, make plays, be positive in my contribution, really just try to go make a name for myself and never have the feeling of being cut ever again."

He turned his phone back on and all the texts and messages flashed on the screen with a ding. Then, there was a call from the Broncos.

Cornerback Bryce Callahan, their key defensive free agent acquisition, was injured again and the Broncos were scrambling to reinforce their secondary, also trading for cornerback Duke Dawson from New England.

When Harris got to Denver, he told coach Vic Fangio he was going to make a name for himself — on special teams.

But Harris soon supplanted Isaac Yiadom in the secondary, moving into the starting lineup in Week 6, where he made a pair of unassisted tackles in a 16-0 shutout of Tennessee.

Famously parsimonious in his praise, Fangio said afterward, “He did all right for his first start in the NFL. Obviously, they caught some balls on him, but I think overall he did fine considering where he came from. What's that saying, 'One man's trash is another man's treasure?' He didn't make Cincinnati's squad so we're glad to have him."

Harris' tackles have gone up with each subsequent start and his best game was his last, when he broke up a pass to Antonio Calloway in the end zone and then batted down Baker Mayfield’s final pass on fourth-and-4 at the Denver 20-yard line to preserve the Broncos’ 24-19 win over the Browns.

That was more than he had envisioned.

"I'm going to be honest, when I first got here I came in with the mindset like, hey, I want to fly around, I want to make plays, I want to make the best of my opportunities — but more so that was from the special teams standpoint," Harris said.

The Broncos (3-6), who visit Minnesota (7-3) this weekend, aren't doing all that much better than the winless Bengals but they are 3-2 since Harris' role increased, and he's at least a small part of that turnaround.

He’s not bitter over the Bengals cutting him.

"I'm happy the situation occurred because I think it struck a fire in me that I needed," Harris said.

And provided the Broncos will exactly what they were missing.

Notes: Von Miller praised rookie QB Drew Lock (thumb), who's practicing this week for the first time since the preseason, calling him a "star in the making" and saying, "I just want to be here when he gets famous. He's going to kill it. He's got everything you need. The other day he ran out and did like a little bootleg and threw it. It was an incomplete pass, but I've seen a lot of good ones play and that was probably the best incomplete pass that I've seen thrown."