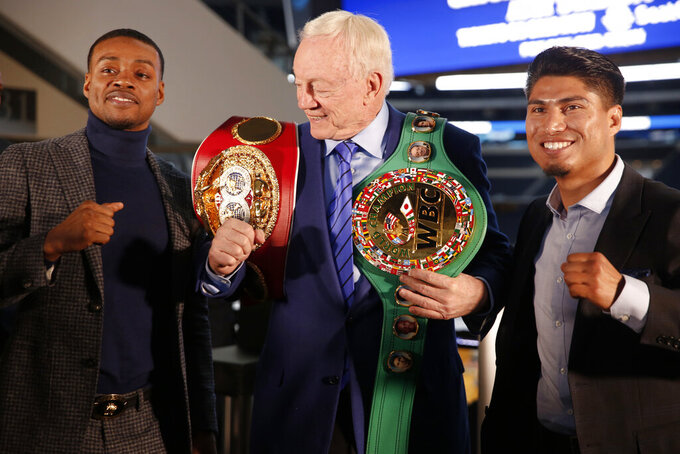 "Stop talking about your other opponents like I'm one of them," shot back Spence, the IBF welterweight champion.

When Spence and Garcia step into the ring Saturday night — at midfield in the massive billion-dollar home stadium of the favorite NFL team for both fighters — it will be a matchup of undefeated champions, and two of the best pound-for-pound boxers.

Garcia, the reigning WBC lightweight champion who is 39-0 with 30 knockouts, is moving up two weight classes to take on Spence, at 24-0 with 21 knockouts and fighting at home in North Texas for the second time in nine months.

Spence is defending his title in the 147-pound division for the third time. He stopped previously undefeated challenger Carlos Ocampo with a first-round knockout at the Dallas Cowboys' practice facility in Frisco last June, not far from his home in Desoto.

This title defense is a pay-per-view match from AT&T Stadium, where the Cowboys play their home games and where the ring will be centered under the looming 72-foot tall video boards that stretch between the 20-yard lines.

"This is a dream come true fighting in my hometown," Spence said. "Seeing Mikey Garcia's face through this whole training camp just made me more focused and more hungry to put on a great performance."

Not only is Spence used to the heavier division, the 29-year-old southpaw is about three inches taller and has a longer reach. But he doesn't think the size difference is what gives him the advantage.

Of course, Garcia feels the same way going into the bout when he has a chance for a major title in a fifth division. That would put him in a select group with Thomas Hearns, Sugar Ray Leonard, Oscar De La Hoya, Manny Pacquiao and Floyd Mayweather Jr.

"This fight, getting the victory, will forever leave my name in the history books of boxing. I'm here to create a legacy, I'm here to make history and this fight does that," Garcia said. "No other fighter's doing what I'm doing, no other fighter is daring to do what I'm doing. ... I'm about big challenges, big obstacles, and just to show everybody that I'm the best."

While acknowledging that "on paper" Garcia is his toughest opponent to date, Spence said he won't know for sure until they get into the ring. And Spence feels like he gets something significant with a victory, other than just retaining his title.

The 31-year-old Garcia, whose current title is in the 135-pound division, had sparring partners 20 pounds heavier than him during training for the rare double-division jump.

"Not only have all of our sparring partners told us, but all of Mikey's opponents, they've said the same thing, that until they're in the ring, they realize how strong and hard Mikey hits," said Robert Garcia, his trainer and brother. "That's one thing that Errol Spence doesn't know."

Mikey Garcia knows he has to fight the best fight of his life, and insists that people haven't yet seen the best of him in the ring because he hasn't yet had an opponent like Spence.

"I've been on cruise control with my opponents, even though I fought some very good champions, undefeated champions," Garcia said. "I make the fight look easy and people haven't seen the best. This fight will show everybody that I'm much better than they ever expected."