Gordon back with Patriots while on non-football injury list 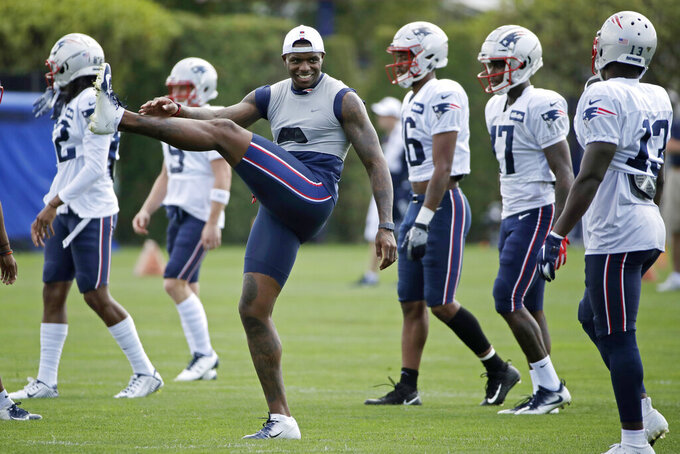 FOXBOROUGH, Mass. (AP) — Oft-suspended wide receiver Josh Gordon returned to the New England Patriots' practice field on Monday without pads and without saying when he might be able to play again.

Gordon was seen stretching on the field during the portion of the team's workout that was open to the media. In the locker room before practice, he declined a request for an interview.

The Patriots placed Gordon on the non-football injury list on Sunday, two days after the NFL reinstated him from an indefinite suspension that cost him the final three games of the 2018 regular season and the team's Super Bowl run. Commissioner Roger Goodell said Gordon could participate in team meetings, conditioning and individual workouts while working himself back into shape.

A 2012 second-round draft pick by the Cleveland Browns, Gordon was suspended for the first two games of the 2013 season for violating the league's substance abuse policy but still caught 87 passes for nine touchdowns and a league-leading 1,646 yards and was named to the All-Pro team.

He was suspended again in 2015 and missed two whole seasons. In interviews, he has acknowledged using Xanax, cocaine, marijuana and other narcotics, and he said in 2017 he smoked pot before "probably every game of my career."

The Browns traded him to New England in September, pairing him with Tom Brady and a locker room that was supposed to be more disciplined than the one he left behind in Cleveland. He had 40 receptions for 720 yards and three touchdowns before he said on Dec. 20 that he was stepping away from football to concentrate on his mental health.

A few hours later, the NFL announced that he had been suspended indefinitely. That ended on Friday, the league said, and "subject to appropriate progress on clinical care and other arrangements, he will be permitted to participate in team activities, including practice."

"We are all rooting for Josh to succeed, both personally and professionally," Goodell said in the statement. "Everyone shares in that hope and will continue to support him to every extent possible. But as Josh acknowledged, ultimately his success is up to him."

Gordon did not play in Saturday's exhibition game against the Tennessee Titans and will not be allowed to play in Thursday night's game against the Carolina Panthers because he hasn't had enough time to practice with the team, the league said.

Patriots coach Bill Belichick declined to comment on Gordon's status on Monday. Teammates said they were glad to have him back.

"Of course, we're all rooting for him and hoping he does well," running back Rex Burkhead said.