'Hail Murray' loss will linger through Bills' bye week off 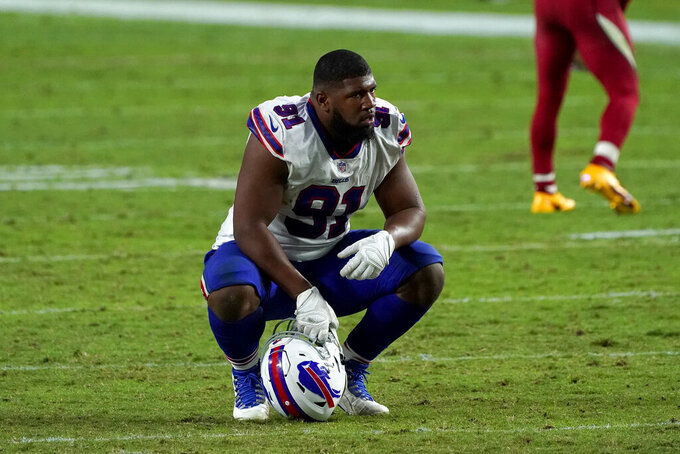 ORCHARD PARK, N.Y. (AP) — It’s bad enough the Buffalo Bills wound up on the losing end of what is one of the NFL’s most dramatic finishes of the season.

What’s worse is how the shock of DeAndre Hopkins’ leaping, last-second touchdown catch is going to linger even longer for a Bills team entering its bye week.

“It (stinks) going into the bye week, because it’s gonna be the only thing on our mind for the next week and a half,” quarterback Josh Allen said. “But I think it’s also a good thing. It makes us hungry.”

There will be plenty of food for thought and much second guessing after Buffalo had what appeared to be certain victory snatched away in a stunning 32-30 loss to the Cardinals on Sunday.

Hopkins outjumped Buffalo’s three best defensive backs in the end zone to come down with the ball with 2 seconds left. The play was immediately dubbed “The Hail Murray,” in honor of Arizona right-handed quarterback Kyler Murray, who was on the run left in heaving the 43-yard pass.

“As coaches, you sit here and you think immediately, 'What could we have done differently?'” coach Sean McDermott said. “It hurts bad. But at the end of the day, that game should never come down to one play.”

Much of the attention was placed on how Micah Hyde, Jordan Poyer and Tre’Davious White had Hopkins surrounded but were unable to get their hands on the ball. But there’s plenty of blame to go around in all three phases of a game Buffalo squandered a 23-9 third-quarter lead.

Murray wouldn’t have been in position to get his footing to attempt the pass had defensive end Mario Addison not gambled by lunging at the quarterback rather than continue chasing him toward the sideline.

Though Allen rallied Buffalo to regain the lead on his 21-yard touchdown pass to Stefon Diggs with 34 seconds left, the quarterback placed the outcome in jeopardy with two forced passes which were intercepted in the second half.

On the bright side, rookie Tyler Bass hit three field-goal attempts from 54 yards or longer in the first half. On the downside, Corey Bojorquez shanked a punt from his 18 that went a mere 12 yards, allowing the Cardinals to cut Buffalo’s lead to 23-19 on Zane Gonzalez’s 45-yard field goal late in the third quarter.

Add it up, and the Bills (7-3) had their AFC East lead trimmed to a half-game after Miami improved to 6-3 by beating the Los Angeles Chargers. And the New England Patriots (4-5) inched back into the picture after beating Baltimore.

“We’re not going to say the sky’s falling,” Allen said. “We’ve got to learn from this one and try to forget about it.”

By Monday morning, replays of Hopkins’ catch were broadcast thousands, and more likely millions, of times on various media platforms, including the “ Good Morning America” video board overlooking Times Square.

Defensive end Jerry Hughes was left with one lament.

“We knew that we had the game won. Unfortunately, those guys came back and made a big play,” Hughes said. “That was like a huge gut punch.”

An offense that's scored 272 points, 42 short of last season’s total and three more than Buffalo managed in 2018. The Bills have generated 20 or more first downs in 10 straight, matching the team’s longest streak set in 1992.

A defense that's allowed 265 points, six more than all of last season, and given up 400 yards five times. The Bills allowed 400 yards three times over the previous two years combined.

Bass set career bests with each field goal, starting with a 54-yarder he banked in off the right upright, followed by a 55-yarder and finally a 58-yarder — one short of the team record set by Steve Christie in 1993.

Tight end Dawson Knox's illegal block negated Devin Singletary’s 21-yard catch and run that would have given Buffalo a first down on Arizona’s 40 late in the third quarter. Allen was intercepted on the next play, which led to Murray’s 15-yard touchdown run to put the Cardinals ahead 26-23 in the final seconds of the period.

Rookie CB Dane Jackson did not return after hurting his right knee, further depleting a secondary missing Josh Norman, Levi Wallace and Dean Marlowe, who were placed on the COVID-19 list on Saturday. ... WR John Brown's status is uncertain after hurting his ankle and knee.

1-3 — Allen’s record in games this season he turns over the ball in the second half.

Rest up and forget. Buffalo returns to host the Chargers on Nov. 29 in a schedule that still includes unbeaten Pittsburgh, and closes with games against the Patriots and Dolphins.