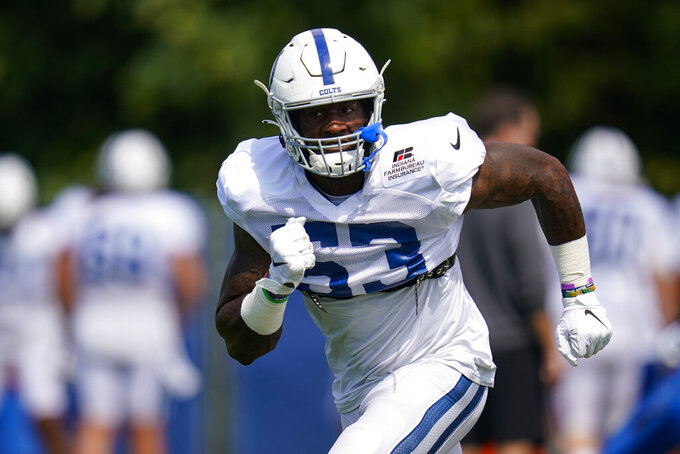 FILE - In this Aug. 13, 2021, file photo, Indianapolis Colts linebacker Darius Leonard runs a drill during joint practice with the Carolina Panthers at the NFL team's football training camp in Westfield, Ind. The idea behind the HBCU Open House staged annually by the NFL is simple: providing opportunities. One emphasis of the programs is making HBCU students and alumni aware of positions on the business side of the game. The vast majority of students won't be emulating Darius Leonard, the Colts' All-Pro linebacker from MEAC's South Carolina State. (AP Photo/Michael Conroy, File)

The idea behind the HBCU Open House staged annually by the NFL is simple: providing opportunities.

Reactions from the recent event indicate the league is on the right track in opening off-the-field paths for students and alumni from the historically Black schools that provide so many players to pro football.

“The event was timely and strategic,” says Jacqie McWilliams, commissioner of the Central Intercollegiate Athletic Association (CIAA), one of three conferences in attendance.

“It confirmed that over the past two years that there have been intentional efforts to support and identify opportunities with the HBCU conferences collectively. I appreciated the NFL Football Operations team creating space for thought leaders to share and be heard while identifying shared values to support meaningful opportunities that bring value, and added value, to both organizations.”

The Open House featured one-on-one and group opportunities with a variety of NFL executives and personnel from departments in football strategy, development, data and analytics, talent acquisition, experience programs and more.

A partnership with the MEAC and SWAC begun in 2016 has been expanded to include the other two conferences. More than 3,000 students in the past five years have participated in programs carried out by the NFL's football ops department.

“The NFL is one of the best in branding and telling stories,” McWilliams notes. “We both recognize there is a need for more Black and Brown professionals in the industry. HBCUs have one of the strongest recruiting bases for talent. HBCUs’ traditions and values align perfectly in assisting with focused programming on student development, career exposure and networking. It is always our goal to increase opportunities for students and athletic administrators from our HBCU institutions and the power of the NFL will assist in providing access and opportunities.”

Indeed, students from HBCU institutions have taken advantage of advancement opportunities through the Careers in Football Forum, the NFL Campus Connection and the HBCU Open House. Some of them are working for NFL teams or in the league office.

Natara Holloway, the NFL's vice president of business operations and strategy for football operations, can't hold back her excitement when speaking about the symbiotic relationship created by these initiatives.

“HBCUs have a long history of diverse students coming out with so much talent, and to add value to companies, and they've been overlooked for a long time,” she says. “Not a lot of companies have traditionally recruited from HBCUs. We found on the field you can find great talent from the HBCUs, of course, and when we started the 2016 programs, found so much more talent. And we have more people from HBCUs in the offices around the league than on the field. People would be surprised to find out that.”

There were 32 HBCU players making opening rosters in 2020. The number for this season is uncertain because final rosters remain fluid until late next week.

One emphasis of the programs is making HBCU students and alumni aware of positions on the business side of the game. The vast majority of students won't be emulating Darius Leonard, the Colts' All-Pro linebacker from the MEAC's South Carolina State.

Instead, they will be pursuing jobs that can range from the communications field to analytics to accounting to, well, pretty much anything involving the running of a franchise.

“We wanted to have a concentrated effort to help people become aware of what careers are available in football,” Holloway explains. “It's an eye-opening experience for us, too. If we don’t know about these students and they don’t know about us, we have issues.”

McWilliams is confident the partnership between the HBCUs and the NFL will continue to grow — in size and impact.

“There is strength and power in creating an HBCU platform for all four conferences with the NFL,” she says. “My hope is that we can brand and market the rich legacy and tradition of players in the NFL, that we build on the leadership through the programs available, and we are intentional in identifying ways to impact our communities through the programs and beyond in our HBCU footprint.”