Healthy and happy, Ferrell starting to pay off for Raiders 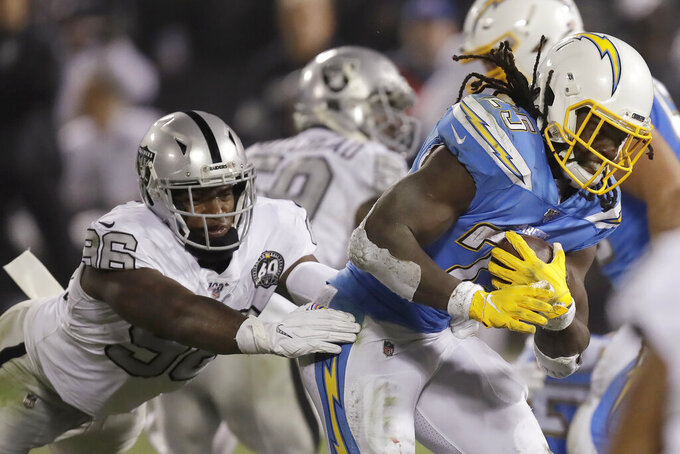 The fourth overall pick in the draft, Ferrell has been lining up more at his customary defensive end spot after splitting time moving inside and outside. He’s also fully health after dropping nearly 20 pounds during a trip to London for a game earlier this season.

“I was so happy today when I weighed in at (266) this morning,” Ferrell said Thursday. “I was like, ‘Thank God. I’m finally back to my weight.’ After we got back from London, I stepped on the scale and I was 250. I just felt bad, felt weak and all those things. It’s all a learning process. I’m just excited to keep building because they remember November.”

The Clemson product had his best game of the season last Thursday night during Oakland’s win over the Los Angeles Chargers. Ferrell had 2 ½ sacks and three hurries while leading the Raiders’ best pass rush of the season and forcing Chargers quarterback Philip Rivers into three interceptions.

Guenther said he noticed Ferrell turning the corner a week earlier when the Raiders beat the Detroit Lions 31-24.

“I really think the light came on for him in the second half of the Detroit game,” Guenther said. “And then he went out against the Chargers and played really good. You can just tell with the look in a guy’s eyes. You know when he starts making plays, you can start saying, ‘Hey I’m starting to figure this out.’ It’s the look in the guy’s eyes and the way he’s handling himself. And he came out the other night and played really good, so hopefully he can keep that up.”

When the season began the Raiders were thin along the interior defensive line but had plenty of depth at end, so Ferrell was asked to move inside. That muted his production somewhat and led to plenty of criticism, both from fans and the media.

Ferrell insisted it didn’t bother him, and both he and the Raiders repeatedly said he was making continual progress.

Still, it felt more than a little satisfying to finally have the stats to back it up.

“At the end of the day for me I’m all about personal player development growth, and then just how we’re winning games,” Ferrell said. “I don’t really focus on the stats. I never have, because when you’re chasing stats you can kind of get caught up in things and then you’re not really focusing on what you need to do to win.

“But it’s always good to kind of shut people up a little bit. People can kind of get on your nerves. Not as far as it’s getting to me, but you kind of hate hearing nonsense, especially when a lot of people aren’t as informed. I don’t blame people for that. It is what it is. I’ve been through this before in college. I’ve always had the spotlight on me. It just comes with the game,” he said.

Notes: Guenther said there is “a very good chance” that newly signed defensive end Dion Jordan will play Sunday against the Cincinnati Bengals. … CB LaMarcus Joyner (hamstring) remains sidelined and is a long shot to play against the Bengals. If Joyner is unable to play, Nevin Lawson or Daryl Worley could replace him in the nickel slot.