Henry, Taylor take center stage in Round 2 of Titans-Colts 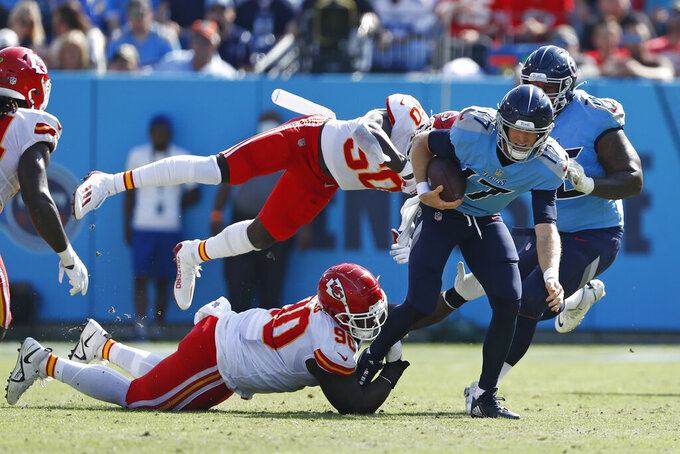 Tennessee Titans quarterback Ryan Tannehill (17) runs with the ball as Kansas City Chiefs defenders Jarran Reed (90) and Willie Gay (50) try to bring him down in the first half of an NFL football game Sunday, Oct. 24, 2021, in Nashville, Tenn. (AP Photo/Wade Payne) 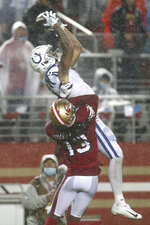 OPENING LINE: Titans by 1 1/2, according to FanDuel SportsBook.

AGAINST THE SPREAD: Tennessee 5-2; Indianapolis 5-2.

TURNOVER DIFFERENTIAL: Titans minus-1 ; Colts plus-9.

TITANS PLAYER TO WATCH: QB Ryan Tannehill appears to be hitting his stride after completing 21 straight passes — the final 10 against Buffalo and the first 11 against Kansas City. He was 21 of 27 with 270 yards, one TD, an interception and a passer rating of 105.2 last week. His 21 games with a passer rating of at least 100 are No. 3 in Titans history behind Steve McNair (40) and Warren Moon (33). Tannehill is 25-12 as Tennessee's starter.

COLTS PLAYER TO WATCH: Michael Pittman Jr. Since the last meeting, Pittman has emerged as the Colts' top receiver. He has two 100-yard games this season and when he's not catching passes, he's drawing penalties. QB Carson Wentz has shown more confidence in Pittman as he becomes a more consistent downfield threat.

KEY MATCHUP: Titans RB Derrick Henry vs. Colts LB Darius Leonard. This twice annual matchup is perhaps the most watched in the AFC South. Henry ran over Leonard and company for 113 yards in September. But Leonard has forced a fumble, recovered a fumble or had an interception in six of seven games this year.

SERIES NOTES: Tennessee has won two straight in the series and three of the last four as it seeks its third season sweep of the Colts. ... Indy has won three of its last four home games against the Titans. ... Tennessee won the only playoff matchup, 19-16 at Indianapolis in January 2000. ... The first meeting, between the Houston Oilers and Baltimore Colts, came in 1970 after the Colts moved from the NFL to the AFC following the merger.

STATS AND STUFF: Tennessee has won three straight and five of six since a season-opening loss to Arizona. ... The Titans have won five straight division games, are 14-6 on the road since 2019 and are 71-6 since 1999 with at least a plus-2 turnover margin. ... Henry needs 131 yards rushing for his fourth straight 1,000-yard season, and two touchdowns to become the third player in franchise history with 70 or more. The others are Eddie George (74) and Earl Campbell. (73) ... Tennessee WR Julio Jones needs 2 yards receiving to pass Andre Reed (13,198) for 17th on the NFL's career list. ... Titans DL Denico Autry had two sacks last week as the defense held Chiefs QB Patrick Mahomes to a career-low 62.3 passer rating. ... Indy has scored a league-high 63 points off takeaways. The Colts also are tied with Buffalo for the league lead in takeaways (16). ... The Colts have forced a turnover in eight straight games. ... Wentz needs one TD pass for No. 125 and can become the first quarterback in franchise history to throw multiple TD passes and no interceptions in five straight games. ... RB Jonathan Taylor has rushed for 50 or more yards in 13 straight games, the second-longest active streak behind Henry (32). Taylor needs 72 yards rushing to pass Alan Ameche (1,819) for fourth most in a player's first two seasons in franchise history.

FANTASY TIP: Henry and Taylor are the obvious choices. But a sleeper pick would be Colts TE Mo Alie-Cox. He's caught four TD passes over the last three weeks and is tied for third in TD receptions among tight ends This week, he could help exploit the middle against a pass defense ranked in the league's bottom third.