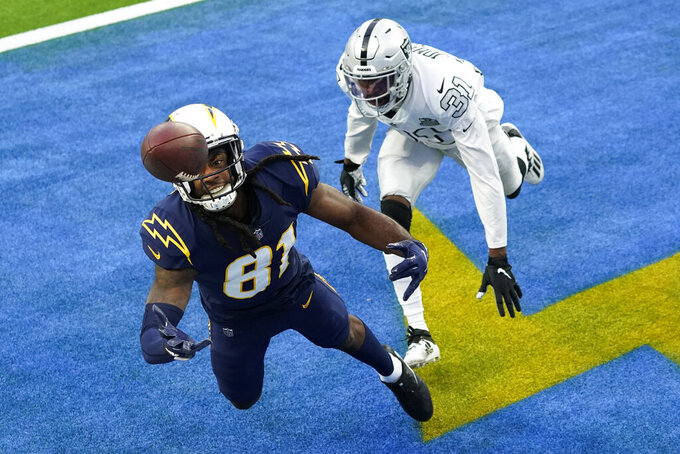 Justin Herbert has exceeded expectations for the Los Angeles Chargers while the rest of the team has been a disappointment.

Herbert is a contender for Offensive Rookie of the Year honors with four 300-yard games and 17 touchdowns in seven starts. Those stats, though, have translated into only one win for the Chargers, who are 2-6 at the midway point for the sixth time in franchise history and first time since 2005.

All but two of Los Angeles' games have come down to the final play, including Sunday's 31-26 loss to the Las Vegas Raiders. Herbert appeared to throw a 4-yard touchdown to Donald Parham Jr., but it was overruled by instant replay when it was determined Parham did not maintain possession throughout the catch.

The loss makes the Chargers 1-5 in such games. They won the opener at Cincinnati with Tyrod Taylor at quarterback when Randy Bullock's potential tying field goal went wide right. That has been one of the few things to go right. Since then, there have been overtime losses to Kansas City and New Orleans, Drew Lock's TD pass at Denver after a defensive pass interference call, and a potential win against Carolina flutter away when Austin Ekeler and Keenan Allen couldn't connect on a lateral.

“I can’t remember a season like this in my entire football life,” coach Anthony Lynn said on Monday.

The Chargers have also accomplished something no one wants to be associated with: blowing leads at an unprecedented rate. They are the first team in NFL history to squander leads of at least 16 points in four straight games. The only game when that didn't lead to a loss was in Week 7 against Jacksonville, where they blew a 16-point, first-half advantage but rallied to win in the fourth quarter.

Despite the series of setbacks, Herbert is trying to stay positive throughout the experience.

The Chargers have been able to have a strong second half and finish with a winning record only once after starting 2-6, which makes the next eight weeks a referendum on the futures of general manager Tom Telesco and Lynn. Los Angeles was 12-4 and made the playoffs two years ago, but is 7-17 since the start of last season. Sunday's loss drops Lynn to 29-29 during his four-year tenure.

The Chargers are second in the league in total offense despite injuries to the right side of their offensive line and Ekeler (hamstring) missing the last four games. Allen is second in the league in receptions (62) and 11th in yards (651) after having his third 100-yard receiving game on Sunday. Herbert has been solid not only against the blitz, but on deep balls. He is tied for the league lead with five completions over 50 yards.

The other two phases. The defense, ranked 18th, hasn't been able to sustain a consistent pass rush, and the secondary has been poor in coverage, giving up plenty of big plays. LA has allowed five pass plays of 50 yards or more, tied for most in the league. Special teams have been equally poor with the coverage and return units near the bottom of the league rankings. Michael Badgley's 73.7% accuracy rate on field goals is 28th in the league.

For all the concerns about the offensive line going into the season, the left side has been solid. Tackle Sam Tevi and guard Forrest Lamp have combined to allow only one sack. Lamp, a second-round pick in his fourth year, is finally showing signs of promise in his first extensive playing time.

Cornerback Casey Hayward Jr. continues to get beaten on deep routes and has shown bad technique in which he tries to play the ball instead of the receiver. Hayward allowed a 45-yard touchdown to Nelson Agholor and a 53-yard completion to Hunter Renfrow on consecutive possessions during the third quarter.

15 — Losses by eight points or fewer since the start of last season.

24 — Combined margin of the Chargers' six losses this season.

The Chargers travel to South Florida to face the Miami Dolphins. It will be the first NFL matchup between Herbert and Tua Tagovailoa.