Hurts, so good? Eagles count on QB to make run at NFC East 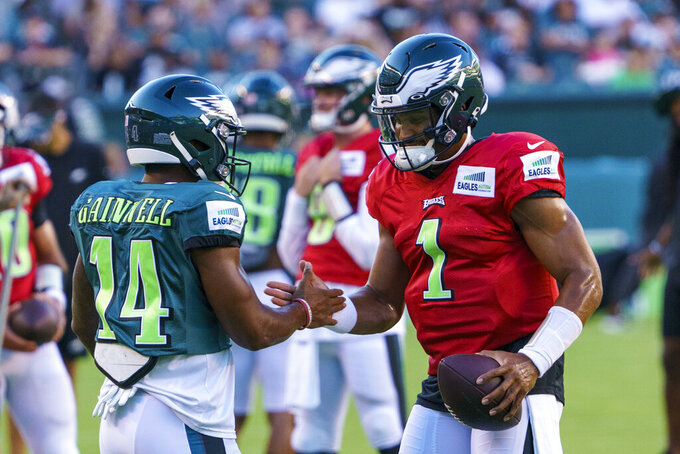 PHILADELPHIA (AP) — Eagles coach Nick Sirianni wore T-shirts with Jalen Hurts’ face on the front and got fired up at an opposing coach when his franchise QB suffered a late hit in a meaningless preseason game.

It's no surprise Sirianni put up a stout defense.

Most NFL coaches are tied to their quarterbacks, and Sirianni’s tenure in Philadelphia can last as long as he wants — well, as long as Hurts is the real deal and the Eagles are winning.

But the bond goes much deeper than just watching video and reviewing scouting reports.

“I spend more time with him than any other player in meetings, talking to him after meetings — everything,” Sirianni said. “He’s the one guy that my son and I have a handshake, and the same handshake is done with Jalen, and my son and Jalen are doing it now, as well.”

Eagles fans wouldn’t mind some high-fives after touchdowns, too.

The Eagles made huge strides in Sirianni’s first season after going 4-11-1 in 2020 and firing Super Bowl-winning coach Doug Pederson. They started 2-5 but won seven of the next nine to secure a playoff berth.

However, all of Philadelphia’s wins, except one over New Orleans, came against teams with losing records. The Eagles finished 0-7 vs. playoff teams.

Just making the playoffs won’t cut it this season.

Hurts must make the next step to prove he is the true, long-term QB in Philadelphia capable of winning tough games on the road and going deep into the playoffs. Hurts threw for 3,166 yards and 16 TDs with nine interceptions, completing 61.3% of his passes in 15 starts in the regular season. He also led the team with 784 yards rushing and 10 TDs.

He improved as a pocket passer and decision-maker during his second year in the league, his first as a full-time starter. But he couldn’t erase doubts about his ability to win games with his arm.

“I think there are a lot of guys in the league that do a lot of special things in the pocket. I think I can do those things,” Hurts said. “There aren’t too many guys in the league that can do the things I can do in terms of extending plays, throwing on the run, getting freaky, getting down the field using my legs, and running with the ball. I think that definitely adds an extra dynamic to my game.”

A.J. Brown stopped inside an official team merchandise store and surprised fans by buying them his jersey. By the opener, there should be plenty of Eagles fans wearing Brown’s jersey who paid full price.

General manager Howie Roseman gave Hurts help on the outside by trading the 18th pick and a third-rounder in the 2022 draft to Tennessee for Brown, a 2020 Pro Bowl receiver who had 185 catches for 2,995 yards and 24 TDs in three seasons with the Titans. Brown, who signed for four years and $57 million guaranteed, will pair with promising second-year pro DeVonta Smith, who set a club rookie record with 916 receiving yards last season.

Brown and Smith are set as Hurts’ top two playmakers, and Sirianni has several options for the No. 3 receiver.

But it’s Brown who has the Eagles thinking big and a making a serious run at an NFC East title.

“I’m one of the top guys in the league. I’m confident in how I play, what I bring to the table,” Brown said. “I’m glad the Eagles believed in me.”

Devon Allen’s next big hurdle might be making the 53-man roster.

Allen’s blazing speed worked for him as a two-time Olympic hurdler and can still help him in the NFL — see the 55-yard TD pass he hauled in during a preseason game — but a six-year layoff from football could work against him as he tries to make the team. The Eagles certainly see value in the 27-year-old speedster and would want to continue to watch him develop on the practice squad. He can run, he can catch, but he isn’t quite NFL ready.

Oh, and if Allen does make the team, he’ll have to scrap the TD celebration that saw him mimic his hurdle runs.

“I said to him in there we have to get a new celebration because you’re a football player now,” Sirianni said.

The Eagles traded for the receiver in the offseason who can catch the ball. They also got the linebacker who can get to the quarterback. The Eagles gave Haason Reddick a $45 million, three-year contract that includes $30 million guaranteed. Reddick, who played at Temple and grew up in Camden, New Jersey, had 11 sacks for Carolina last year. A first-round pick by Arizona in 2017, Reddick had 12 1/2 sacks for the Cardinals in 2020.

“The greatest research tool when we acquired him was his brain,” defensive coordinator Jonathan Gannon said. “We had a good talk, sat down with him and said, ‘Hey, what are you comfortable with, what are you not, what spots do you want to be in, and what don’t you? Here’s how we see you fitting into the scheme. Here is our vision for you of how we’re going to deploy you and how we’re going to use you.’”

The Eagles open the season Sept. 11 at Detroit and play their home opener on Monday night, Sept. 19, against Minnesota. Think expectations are high around Philly? Well, the national television schedule seems to be betting on the Eagles blossoming into a must-watch team. The Eagles have five prime-time games over the first 12 weeks of the season. They could enjoy a soft start to the year. Their first four opponents — Detroit, Minnesota, Washington and Jacksonville — went 21-46-1 in 2021. Speaking of the Jags, the Eagles will reunite with a familiar face Oct. 2 at the Linc when Pederson returns five years after he led Philadelphia to its only Super Bowl win.