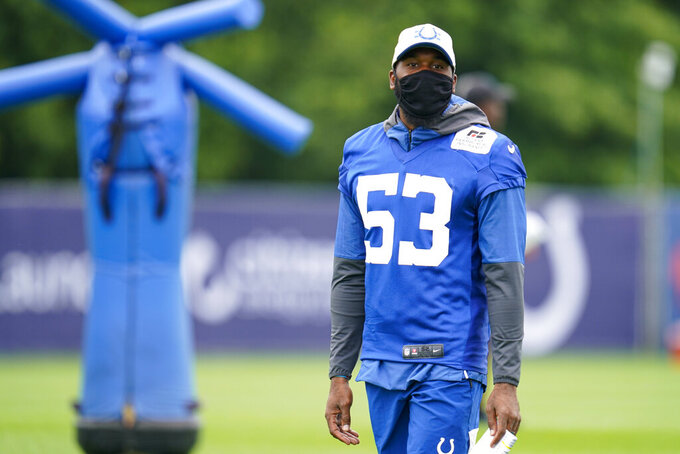 INDIANAPOLIS (AP) — Darius Leonard always believed he was the best linebacker in football. The Indianapolis Colts made sure he gets paid like it.

The two-time All-Pro agreed on Sunday to a five-year contract extension worth $99.25 million that includes $52 million in guaranteed money, according to a person with knowledge of the deal. The person requested anonymity because the team has not released the terms publicly.

“I’m a competitor, so if you aren’t first, you’re last,"" Leonard said while wearing a Colts cowboy hat. “Just to have my name right now at the top, that’s something I don’t take for granted. I have to continue to go out and prove I can play."

Team officials made the announcement while Indy's players were still on the practice field and in between Saturday's Hall of Fame induction speech from Edgerrin James and Sunday's scheduled induction speech by Peyton Manning. Coach Frank Reich, who once coached Manning, was expected to attend the ceremony.

Everybody sees the impact Leonard makes whether he's on the field or on the sideline, a place he has been for the past two weeks as he recovers from ankle surgery in early June. His energy is contagious, he plays with a chip on his shoulder and refuses to settle for second best. Reich doesn't expect that to change now, either.

“He doesn’t know how to turn it off, you know what I mean?" Reich said. “He’s got so much pride in how he plays and how he performs, the standard that he holds himself to. That would be the least of my worries for him. Just happy for him and it's well-deserved.”

Leonard wanted to get everything finished before Indy's Sept. 12 season opener against Seattle. And he already knows what he wants to do with the money: Buy a land plot so he can build a house, and helping his family.

In December, Leonard explained his childhood story in The Players Tribune. He described growing up with two older brothers in jail, three sisters in one bedroom and four boys in another, and how he shared a twin bed with his brother, Keivonte. And he's spoken about the depression he's felt since Keivonte died on Dec. 15, 2012.

“It’s time for her to just sit back and relax and the worst part about it, everybody knows my story, my brother got killed when he was 18, I was 17, and this is what he dreamed of," Leonard said Sunday. “For him not to be here with me to witness this, that’s the only thing that really sucks."

Leonard's extension was expected to be a blockbuster.

He led the NFL in tackles in 2018, earning his first All-Pro selection and the league's Defensive Rookie of the Year Award. He was selected to the Pro Bowl in 2019 and 2020 and made the All-Pro team again last season.

In 42 games, all starts, the former South Carolina State star has 416 tackles, 26 tackles for loss, 15 sacks and nine forced fumbles. He also has seven interceptions, including one he returned for a touchdown. He's the 10th player since 1987 to top the 400-tackle mark in his first three seasons.

In 2020, Leonard started 14 games and had 132 tackles, seven tackles for loss and three sacks. His average of 9.9 tackles per game is the highest since he entered the league. Leonard could play an even bigger role this season as the Colts try to replace middle linebacker Anthony Walker, who signed with Cleveland in free agency.

“Wow, are we excited to have the leader of our defense, a cornerstone of our defense and this team back," Reich said. “A great leader, as we all know, Darius brings the juice to another level. He’s a playmaker at another level. We think he is tops in the league at what he does."

By Brian Dulik 2 hrs ago
By Tom Canavan an hour ago
By Teresa M. Walker 2 hrs ago
By Dennis Waszak Jr. 17 hrs ago
By Greg Beacham 20 hrs ago