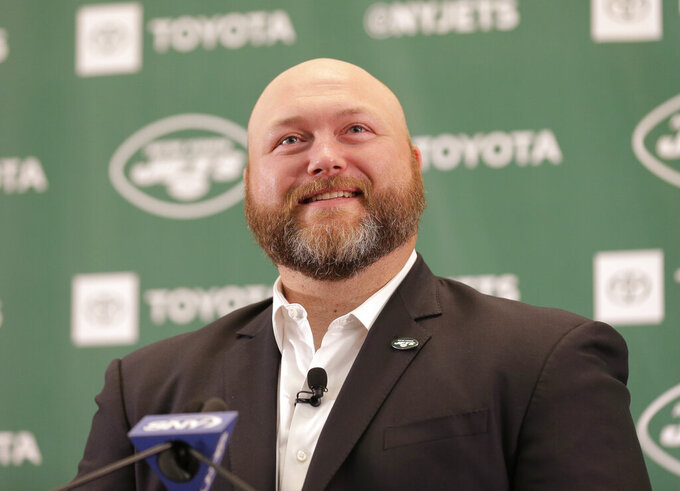 NEW YORK (AP) — Joe Douglas filled out his front office staff with some familiar faces who have plenty of NFL experience.

The Jets signed Douglas to a six-year contract on June 7, three weeks after Mike Maccagnan was fired as GM. He went right to work in bringing in some experienced executives, a few whom he had previous working relationships.

"I am excited to add these four talented men to our group," Douglas said in a statement posted on the team's website. "They will help us find the right players as we continue to develop our culture. You need to build depth in an organization at all spots and that includes the front office.

"Greg, Dan and Kevin are bright football minds who I'm happy to work alongside. We have a lot of good people here and this is only going to help us collectively move forward."

Hogan was Indianapolis' vice president of player personnel the last two years after serving as the Jets' director of college scouting in 2015-16. Back again in New York, he'll serve as Douglas' right-hand man while helping manage the Jets' pro and college scouting departments. Hogan also worked in Chicago as a college and national scout.

Alexander spent the last 20 years with Baltimore, including the last nine as the Ravens' assistant director of pro personnel. Douglas worked with Alexander in Baltimore when he was in its front office from 2000-14.

Savage is a longtime NFL executive who has worked in the front offices of Baltimore — where he spent five years with Douglas — Cleveland and Philadelphia. Savage was the Browns' general manager from 2005-08, his second stint with the team. He was also the executive director of the Senior Bowl from 2012-18 and general manager of the Arizona Hotshots of the Alliance of American Football.

Nolan was a player personnel scout with the Eagles since 2016 after working a year as a personnel assistant with the Ravens.

Najmeh was the Jets' coordinator of pro scouting last year and has served in several roles in the scouting department with the team since 2009. Zbojovsky has worked 12 years with New York, including the last 10 as the college scouting coordinator. Murphy was a pro scout the past two seasons after stints with Buffalo and Houston the previous nine years.