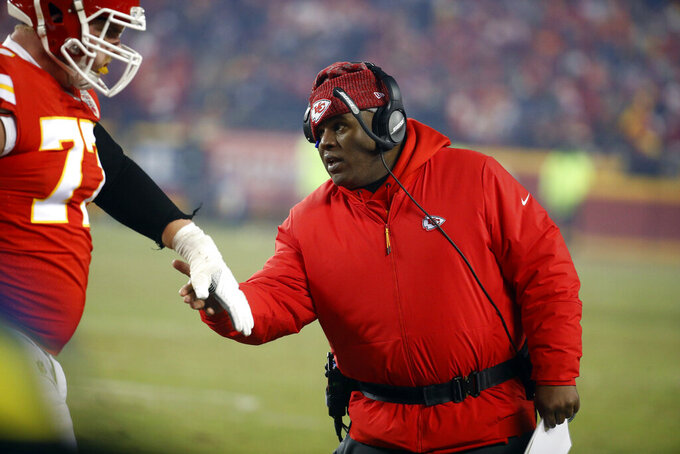 With six vacancies around the league, the 51-year-old Bieniemy is one of the most popular candidates after helping the Chiefs and Patrick Mahomes win the Super Bowl last year and directing the NFL's No. 1 offense this season. Bieniemy also interviewed with Atlanta and Detroit earlier this week.

Teams are speaking to coaching and general manager candidates through virtual interviews rather than in-person visits in early round discussions because of the coronavirus pandemic.

This is the second time Bieniemy has interviewed with the Jets, with the first coming in 2019 before they hired Adam Gase. In two years, Gase went 9-23, including a 2-14 season that included a franchise-worst 0-13 start. Gase was fired last Sunday night after New York's season finale at New England.

General manager Joe Douglas, who is leading his first coaching search, said Tuesday the team would “cast a very wide net" as it tries to find someone who can help lead the Jets back to respectability. They haven't made the postseason since 2010, the longest playoff drought in the NFL after Cleveland and Tampa Bay earned berths this season.

Bieniemy is a former running back who played with the Chargers, Bengals and Eagles over nine NFL seasons after being a second-round pick out of Colorado in 1991. He began his coaching career as the Buffaloes' running backs coach in 2001 before serving in a similar role with UCLA and the Vikings.

“I don't know of anybody who is a better leader of men,” Reid said of Bieniemy during a Zoom call Monday with reporters. “He's going to be honest with you, straightforward, and he knows the offense — those are all important things to be a head coach.”

Under Bieniemy, Mahomes has become one of the NFL's most dynamic and productive players and the Chiefs' offense has thrived. Kansas City has finished no worse than sixth in yards and points per game in Bieniemy's three seasons in charge of the offense.

“Someone needs to have that picture in their mind that Eric Bieniemy can go and lead their organization,” Reid said. “Owners don't like problems, I know that. They're paying coaches to lead a team and not have a load of worry thrown in your lap, and I know he can do that for somebody.”