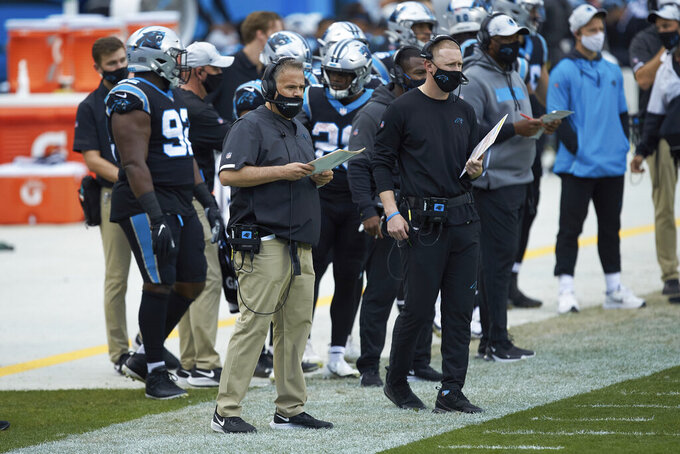 FILE - Carolina Panthers head coach Matt Rhule, left, and offensive coordinator Joe Brady watch from the sideline during an NFL football game against the Detroit Lions in Charlotte, N.C., in this, Sunday, Nov. 22, 2020, file photo. Panthers offensive coordinator Joe Brady is becoming a popular name for NFL teams seeking to fill head coaching vacancies. A person familiar with the situation says the Chargers, Falcons and Texans have all asked for and received permission from the Panthers to interview Brady for their head coaching jobs. (AP Photo/Brian Westerholt, File)

The Jets are also expected to speak to Indianapolis defensive coordinator Matt Eberflus in the next few days as the team's list of candidates grows.

The 31-year-old Brady completed his first season as the Panthers' offensive coordinator under Matt Rhule. Carolina ranked 21st overall and 24th in scoring, but had star running back Christian McCaffrey for only three games because of injuries. The Panthers still had four players — running back Mike Davis and wide receivers D.J. Moore, Robby Anderson and Curtis Samuel — have at least 1,000 yards from scrimmage, becoming only the fifth team in the Super Bowl era to accomplish that feat.

Brady has been a popular candidate this offseason, having also interviewed with Atlanta, Houston and the Los Angeles Chargers for their coaching vacancies.

Brady began his coaching career as the linebackers coach at William & Mary, his alma mater, in 2013 before going to Penn State in 2015 to serve as a graduate assistant. He got his first NFL job in 2017 as an offensive assistant under Sean Payton in New Orleans.

Brady was hired by LSU in 2019 as the passing game coordinator and wide receivers coach, helping lead the undefeated Tigers to the national championship. He worked closely with quarterback Joe Burrow, who was the Heisman Award winner and taken No. 1 overall by Cincinnati in the NFL draft last year, and wide receiver Justin Jefferson, who set a rookie record this season with 1,400 yards receiving on 88 catches for Minnesota.